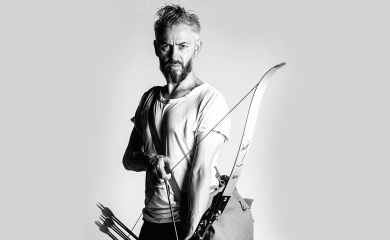 Produced by Hoipolloi in supporting Street Child United, Me & Robin Hood is Shon Dale-Jones’s new solo show, currently running at the Liverpool Everyman for 2 nights and is aimed to raise money for street children around the world. Having already raised an impressive £19,000, Dale-Jones is on a mission to make the nation aware of just how prolific this problem is worldwide.

The stage is bare; in fact Dale-Jones does not use costumes or have any need of a set, instead he fills the stage with his story of how it came to be that he has written this one man show and why it is important to share it. Using his favourite childhood character Robin Hood, Dale-Jones has created a detailed story of his own experiences; his family and friends come to life as he reminisces about when he and his best mate used to pretend to be Robin Hood, riding through the woods on their bikes, robbing the rich to give to the poor.

In his unique way, Dale-Jones creates a story that we can all relate to; a fictional character that we all wanted to be as a child. For him seeing himself as Robin Hood as a child must have been a great thing to aspire to: to rob the rich to give to the poor. As an adult he puts that childhood innocence into an adult perspective, to make a point of what really is going on around us and that we can make a difference if we wanted to.

Dale-Jones has a very natural way of connecting with his audience, his delivery is quick and it is very easy to be absorbed in the pictures that he creates. As always his script is well written and thought out in terms of mixing in the real issues that are obviously the driving force for producing this piece. There is plenty of comedy thrown in, making this a very accessible, topical and entertaining show.

Me & Robin Hood runs until 4 November at the Liverpool Everyman. For Tickets https://www.everymanplayhouse.com/whats-on/me-robin-hood