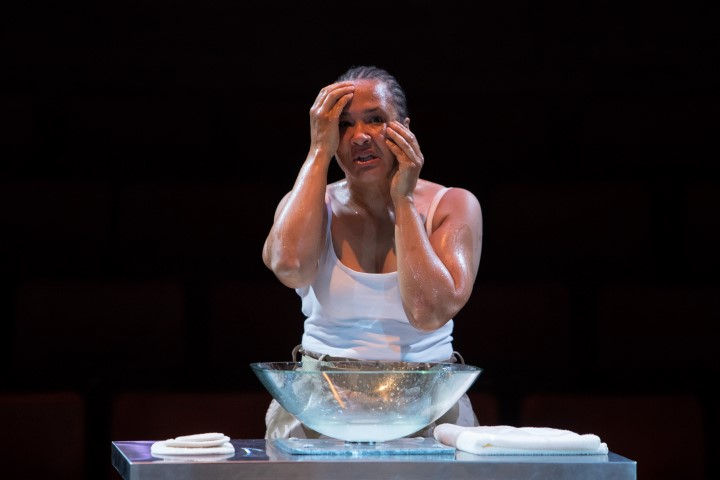 We might as well start with the elephant in the room: Othello (at the Liverpool Everyman) is played by a woman. Which is certainly one way to grab your audience’s attention, not to mention headlines.

Part of the confusion here is that the language is inconsistent. Othello is variously termed “my lord” and “my lady”, and at one point talks of her “boyhood.” Some of this can be put down to not wanting to mess with the metre but some of it was just, I think, an oversight.

So, Othello is now a woman, which transformation has much to merit it. By making Othello a successful woman in a military milieu we bring to the fore for a 21st Century audience something akin to what being a strong black man in the early 17th Century must have felt like. Even the dignitaries who so loved him for his martial successes would rather disown their daughters than have him marry into their families. The whole world awaits your downfall.

Which is all quite clever comment on just how easily seemingly successful women are toppled today. How precarious is the Feminism we take for granted? And how “other” is lesbianism still in our society?

So far, so good. And the play is updated is other ways too. Othello’s regiment is seen larging it in Ayia Napa, taking selfies on their iphones.

But if Othello is remade, then so too must be her Desdemona. But this production fails to update her in any way other than her wardrobe, which, come to think of it, seems to reference Roman Holiday in its Audrey Hepburn-ish Med chic so wasn’t exactly modern either. I’d have really liked to have seen Emily Hughes putting up a bit more of a fight. She practically bares her throat to Othello and asks to be strangled. This is no 21st Century relationship of equals.

So whilst a female Othello may be a useful metaphor, without an updated Desdemona, it doesn’t ring entirely true. The lesbian relationship is ultimately unconvincing because women don’t tend to kill the woman they love (I Googled this to make sure.) Othello herself is still an outsider in her own play, an anachronism in a production that still portrays the sexual politics of the 17th Century. Perhaps a more credible ending would have rewritten this, unfaithful to Shakespeare as it would have been.

What does remain faithful to the original, and indeed is the reason why we still go to see Shakespeare today, is the portrayal of jealousy, as manifested across several characters. Othello believes Desdemona to be unfaithful to him; Iago resents Othello’s promotion of Cassio above him; Othello herself, an outsider, is victim to other people’s jealousies.

And it is the insidious, poisonous Iago, portrayed with psychopathic ordinariness by Patrick Brennan, who is the lynchpin to a play which abounds with the kind of ironies, passions and manipulations that feel as contemporary today as they did four centuries ago.

Othello is scheduled until July 10. For Tickets Click HERE