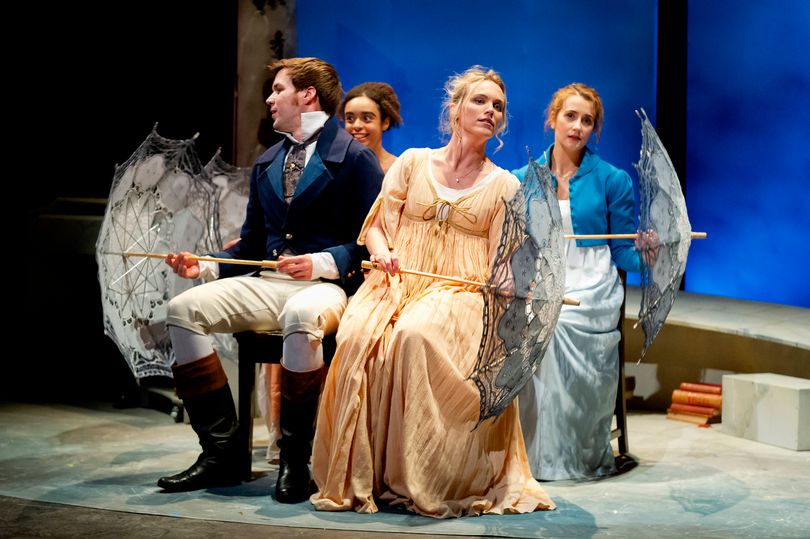 This production of Jane Austen’s last novel, published posthumously in 1818, begins with our heroine, Anne Elliot, addressing the audience. She talks of the blue sea, the wind, and her lost love. The echoes of voices from some seven years past drift across the stage, telling her that Frederick Wentworth is her lesser, persuading her to reject his proposal of marriage. We are left with a pervasive sense of regret.

I can see what they’re trying to do here: they’ve read between Austen’s lines and provided Anne with an interior monologue; a shortcut to how she feels about things. The thing is, if you like Austen, you won’t like this.

Because Jane Austen’s prose is nothing if not controlled, even if her characters are not. And to have her heroine emoting at the audience feels rather wrong. It also seems somewhat unnecessary because what makes Austen’s work endure is that, taken out of the early 19th Century framework of Napoleonic Wars and women left destitute by archaic and patriarchal laws that don’t allow them to inherit estates, she writes a good love story. So we don’t need to have heartbreak thrust down our throats because we already know it. It’s in the DNA of every novel we’ve ever read and every Colin Firth movie we’ve ever seen.

Plus Austen has taken the precaution of putting words in her characters’ mouths herself. “You pierce my soul. I am half agony, half hope…I have loved none but you.” Well, it works for me.

However, having said all this, the tiny cast of six work their socks off, each inhabiting multiple roles. Top hats off to them for remembering so many lines across so many characters. Unfortunately, this role-switching further serves to confuse the audience. There’s only so much the addition of an apron and an accent can do to differentiate one character from another. And while the cast, like the music, whirls about, picking up personae like so many puppets, the set stays curiously static.

There’s one scene of exquisite awkwardness where Jason Ryall’s Wentworth encounters Ceri-Lyn Cissone’s Anne in Bath where they have nothing and everything to say to each other which stands out. Well acted then, just not very well conceived.