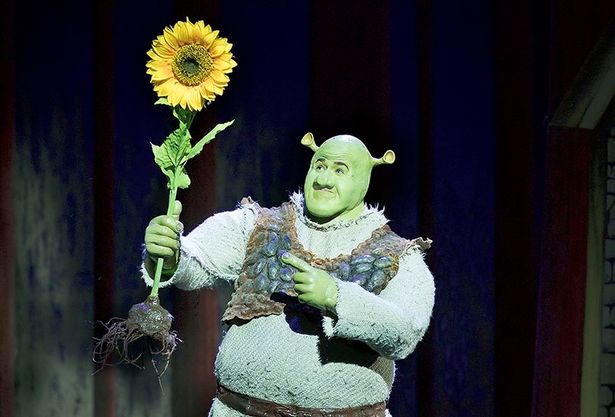 There’s something special happening at The Liverpool Empire until June 23. Shrek is back in town and, although it doesn’t have quite the same size and volume as last time, it still packs a punch!

The suspension of belief is a wonderful thing. In this show, we have every fairytale character you could imagine all brought to beautifully choreographed and costumed life. Pinocchio in particular, here played by Joseph Dockree, is an absolute hoot and sort of epitomises the subtlety of the humour that Shrek contains.

The sets are big and bold with the stage transforming at the drop of a wicked witch’s hat. The music too, performed live and in spectacular surround sound, is an absolute joy. This despite there being few, if any, actual showstoppers to hum along to.

It’s all in the telling and, if you don’t know it by now, then it’s not going to be told here. Suffice to say the main characters are all performed with fabulous fun. Steffan Harri’s Shrek is as big and bold and Scottish as you could wish for. Laura Main’s Princess Fiona is all feisty bravado and naive charm, with a magnificent singing voice to match, whereas Marcus Ayton’s Donkey provides the frivolity and mayhem superbly well.

Yet it is Samuel Holmes’ Farquaad who steals proceedings. His delivery, timing and total abandon to the role are a pleasure to witness. The one liners come thick and fast, so you’ll have to be on your guard, and never more so than when Holmes is on stage.

The magic of Shrek is in the action. It’s fast and furious in this production, with lights, effects, animations and dragons galore. Yes, there are a few tone downs from the last time around, but nevertheless Shrek: The Musical remains a joy that’ll have everybody who sees it smiling broadly all their way home through the woods!

A monster show for young and old, alike.