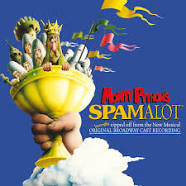 So, this is what happened in Spamalot at Chester’s Storyhouse theatre: 10 minutes in, say 15 minutes, and a member of the company collapses on the stage and starts wailing pitifully. Given that we’re nearing the end of a number called I’m Not Dead Yet, the audience weren’t sure if  it wasn’t all part of the show. At first. When the curtain came down abruptly, we knew it wasn’t. Obviously in pain, but clearly not dying, Matthew Pennington was invalided off. Poor chap, hope he’s okay. Something to do with a knee.

But for the next 45 minutes (count ‘em) we waited. And waited. What were they doing? Dragging the understudy in from the pub? Forensically sweeping the stage for evidence? Relocating Mr. Pennington’s dislocated knee?

Whatever, it was a bum-numbingly long time. Okay, we were thanked for our patience twice but it was hardly a seamless transition and, I’m afraid, by the time the curtain came back up – some of the magic was gone.

Based on Monty Python and the Holy Grail, which lampoons the legend of King Arthur and his knights of the round table, the song You Won’t Succeed in Showbiz (Without a Star) asserts that you’re going to need Taylor Swift to stage a successful musical. But it wasn’t the lack of stellar names that made this production fall a little flat. Granted, the unfortunate incident of the knee in the chorus line didn’t help, but actually the cast could all sing, dance and act with great proficiency. Hats off to Joel Benedict who came on to take over Penninton’s role of Sir Herbert with great aplomb. And special mentions to Ryan Limb’s foppish Sir Galahad and the mighty-voiced Sarah Harlington’s Lady of the Lake.

So what was it that wasn’t quite celestial? Fans of the Holy Grail would have been gratified to see the very silly Knights who say Ni and the Black Knight who won’t admit defeat despite being rendered both armless and legless by King Arthur’s sword. We had a couple of very Pythonesque moments when the hand and indeed foot of God came down from the ceiling in divine interventions. And, frankly, grown men capering around the stage as if on horseback accompanied by the clip-clopping of coconut shells is never not funny.

But, as used as we are to both pantomime and Python dames, men dressed as women twiddling their nipples in a grotesque parody of femininity and Lancelot outed as a closet disco-panted poof hit rather a bum note. Despite references to Trump and Simon Cowell, it felt rather dated and tasteless. Perhaps it’s these post-Weinstein days but suddenly cheap shots aimed at women and gays just aren’t that funny.

Which is not to say that the script is not very clever in parts. The Lady of the Lake performs a role within a role: her inner diva is more out than in a lot of the time and she complains (lustily in her best Shirley Bassey boom) Whatever Happened to My Part. And the The Song That Goes Like This is both musically and lyrically funny as it pastiches any Lloyd Webber romantic duet whilst pointing out that it is doing just that.

But ultimately it was a bit of a curate’s egg: only good in parts.