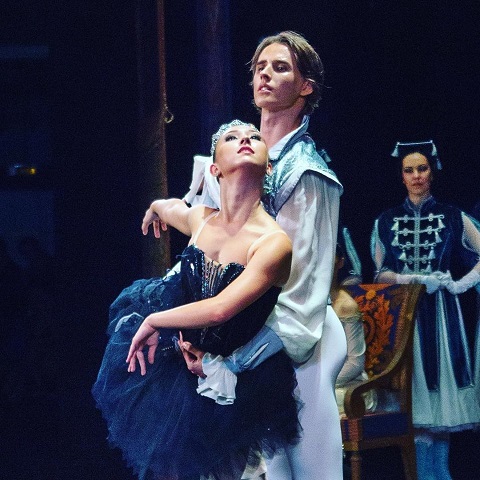 I was looking forward to Swan Lake at the Floral Pavilion – men in tights, ladies with endless legs, exquisite costumes and intricate footwork. And, I suppose, in this, I was not disappointed. The Russian State Ballet gave us a veritable foam of petticoats borne aloft a sea of crotches. Each diverting, in their own way.
But not compelling, exactly.

Prince Siegfried, portrayed (possibly intentionally) as a sullen teen, sulks his way through his birthday party. Von Rothbart seeks to impress him with his magical theatre on the lake, where the Prince meets star swan-girl, Odette. Being of a romantic bent, Siegfried soon falls in love with her.

Von Rothbart, dressed obligingly in black so that we know he’s the villain, does not want to relinquish his prize dancer to the palace so throws Siegfried a decoy in the form of Odile. A sitting duck, the faithless Prince is seduced by Odile and throws over Odette.

There is much interplay between light and dark: the innocent Siegfried and Odette, in sparkling white, are mirrored by the villainous Von Rothbart and the self-serving Odile, in slick, oily nightshade and brittle, black tutu respectively.
For my money, whichever of the two Von Rothbarts we had last night was the most mesmerising character, with his unsuppressed sinuous energy and slight menace. I found Siegfried technically tight but lacklustre and the choreography of the ladies’ strangely flatfooted.

The problem, as I see it, is that with ballet the narrative tends to be so wafer-thin that the music and the dance have to work really hard to give us any emotional charge. And glorious as Tchaikovsky’s efforts are, the dancing, though solid, seemed less than spectacular.

At the dramatic apogee, where we hear the final recurrence of the music’s iconic anthem, the winsome oboe, the descending strings, the insistent timpani, the orchestral crescendo, all leading to that heart-stopping black swan moment and… nothing. It was more of a glide than a leap. Very like a swan, composed on the surface. But at that moment we needed to feel the frantic paddling, the ruffled feathers, the beating heart, the angst. Otherwise, it all just feels a bit dead in the water.