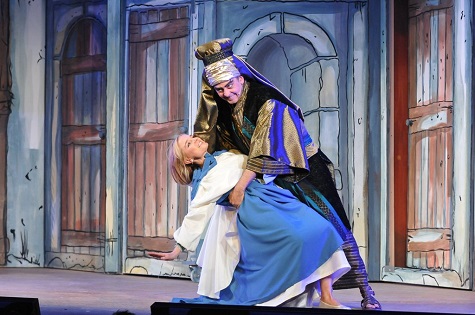 If there’s one thing guaranteed at Christmas, it’s that The Liverpool Royal Court won’t do stuff by halves. Give them ‘The Greatest Story Ever Told’ and they’ll simply rewrite it, throw in a few irreverences, season it all with some chilli-powered mirth, leave to settle on a stunning set and serve to gales of laughter. In short, The Scouse Nativity isn’t so much a Christmas show, more a well garnished broth that’s as filling as anything Heinz ever come up with and a darn sight more entertaining.

First things first: the set. There comes a point where superlatives are superfluous. Just when you think the guys backstage at The Court can’t get any bigger, bolder or brasher with their designs up comes a show like this. To say it’s huge is to say Paris has a nice tower. The way the cast use its ‘storybook’ features – all of whom, as you would expect, are exemplary – is testament not only to Mark Walters’ imaginings, but also those of writer Kevin Fearon and director Cal McCrystal, as the backdrop becomes George Martin to The Beatles:  the extra something that makes it all work.

The story well, there’s this boy and girl-  Mary and Joseph – who fancy each other like mad but are too shy to do anything about it. Then this Angela Gabriel woman comes and tells them they’re going to have a kid, and the rest as they say is history. The shepherds get to know and the nasty King Herod (he has the hots for Mary) is none too impressed when he finds out, so its agreed everyone assembles in Bethlehem for a showdown; a head-to-Herod that also comprises something akin to a late night variety show on the Benidorm strip.

What can be said about this troupe that’s not been said already?  Once again they’re as fine tuned as a Ferrari, as slick as Richard Madley overdosed on Extra Slime Pills and as devilishly mischievous as a bag of monkeys on a banana binge.

Stands outs are all of them, but particular mentions have to go to the sublime Keddy Sutton, the imperious Lindzi Germain, the ever wonderful Andrew Schofield, the exquisite Stephen Fletcher, the gorgeous Hayley Hampson and the fabulous Michael Fletcher. True stars, pun intended, one and all. Oh and lest we forget the stage hands who, with seeming random abandon, interject gloriously.

Every Christmas show needs a villain and, let’s be fair here, Herod is top of the bunch in being pretty vile. He’s pretty difficult to make funny too, yet in the hands of the quite magnificent Paul Duckworth, you almost come around to liking the infant killing ruler of yore.  So devilishly nasty and so uproariously outrageous is he in the role, Duckworth underlines yet again why it is he – and this show – is so damn popular.

It’s the visualisation, the delivery and the out-and-out outlandishness of his performance that lingers in the memory. So much so that a good few hours after, you’ll find yourself quietly chuckling over something he’s done or said: the mark of a great comic turn if ever there was one. Yes we almost grow to like Herod … but not quite.

There’s surprises – a famous chat show host pops up, executed brilliantly by Andrew Schofield – there are camels, asses, chickens and sheep; there are songs, dances and crackers; there are gifts galore and something the whole family (over 16) can enjoy. The Scouse Nativity is a veritable gift-wrapped bundle of joy that’ll have you crying, aching and screaming for more.

Fabulous festive frolics and a whole lotta laughing going down at The Royal Court again this year then!