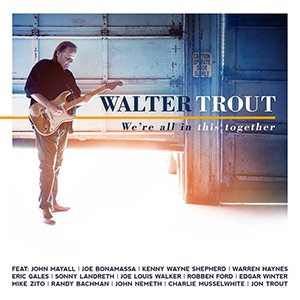 The queue would be a mile long and ten deep to witness such an event, surely!!For now though we can content ourselves with the elation that flows from every bar, chord and riff.Where the main man’s previous album Battle Scars is an introspective examination of personal mortality, We’re All In This Together looks to a bright future with Trout’s rejuvenation and profound gratitude for having survived serious illness brought to the fore through what is some immaculate playing and vocal dexterity.

Kenny Wayne Shepherd’s contribution to the opening Gonna Hurt Like Hell is mesmeric. The track’s duelling and underscoring being a testament to both men’s mutual respect and understanding of each other’s craft; it’s raw edginess making it appear as though Shepherd has simply wandered in and jammed to his heart’s content.

In fact the whole album has this feel, as though it is just one big party that’s taking place and that we are ourselves invited to witness. Charlie Musselwhite’s rich harmonica on the soulful The Other Side of the Pillow is transcendent, whereas Eric Gales’ slick energy and pure vocals on Somebody Goin’ Down are an absolute revolution in what makes a single moment stick around a long, long time.

Click To Order Walter Trout: We’re All In This Together

With 14 tracks each vying with the other for their own place on the podium, it’s all but impossible to exalt them all. However, stand out tracks on anybody’s list would have to be the Skynyrd vibes adorning She Listens to the Blackbird Sing featuring the magnificent Mike Zito, the cool brass underpinning She Steals My Heart Away, with Edgar Winter’s keys providing yet more depth, the extraordinary musicianship involved on the gem that is Mr Davis and the immaculate work offered up as always by Joe Bonamassa on the closing titular track.

We’re All In This Together isn’t so much an album then, but more a festival in many respects of all that is great and good in blues right now. In bringing such a collective together on one rock solid album, Walter Trout has further cemented his status of being both a pioneer and an icon to his peers, contemporaries and fans alike.