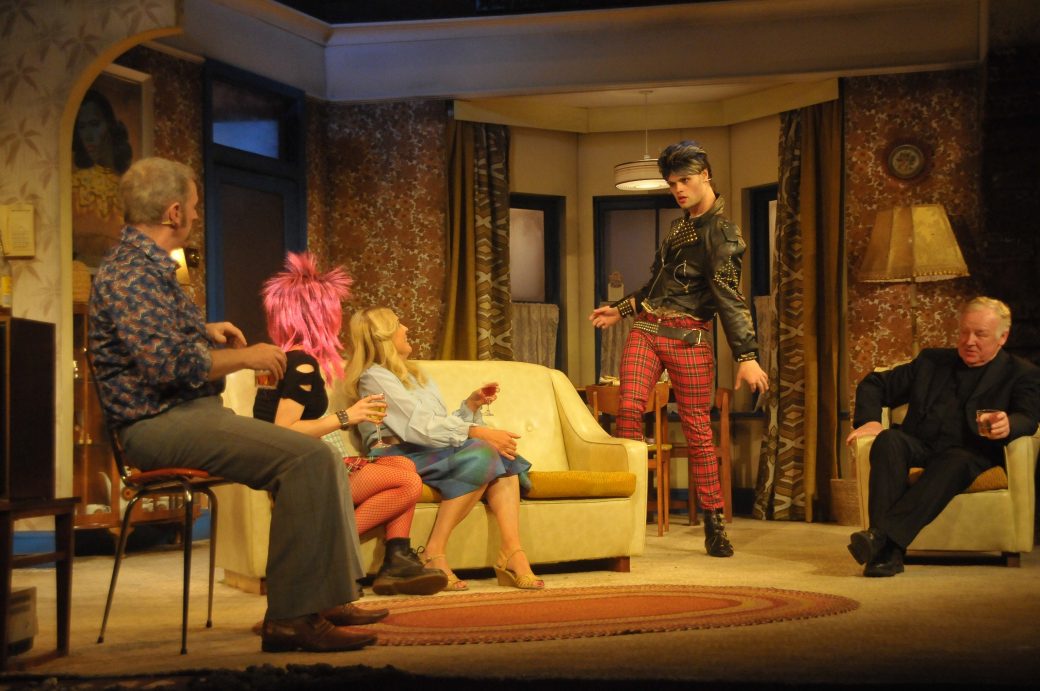 The Miracle of Great Homer Street

The Liverpool Royal Court like taking a chance on new works. Just look at Mam! I’m ‘ere – which makes a welcome return next month – and The Royal, for two. Now, with Gerry Linford’s The Miracle of Great Homer Street, there’s another new and very different offering to be talked about with, ahem, reverence.

This isn’t the usual Court fair. It’s not a million miles per hour, gag-a-second, crack-your-ribs funny, although funny it most certainly is. No. The Miracle of Great Homer Street is more considered, more observant and more questioning than that which the venue is traditionally known for. All things considered, this can only be seen as good for audiences and theatre alike.

It’s Liverpool, 1978. The World Cup is on and Father Aherne, who likes a bet, is on a winning streak. It’s as if he’s getting help from above. His luck doesn’t stretch to accommodation as he finds himself without a roof over his head. His prayers are quickly answered when Marion, one of his parishioners, is delighted to offer him her spare room. Terry, her non-believing husband, is not so keen.Over the summer, the two men bond when the beautiful game seems to be going in their favour but will they triumph when the final whistle blows?

It’s easy to see why Les Dennis fell so hard for this script when judging the Hope Playwriting Prize for which this came runner up last year. The balance of Gerry Linford’s scripting is absolutely sublime, with a nuanced and beautifully thought out plot driving proceedings along at an at times almost languid-yet-powerful pace.

Dennis himself is superb as Father Aherne. A non-stereotypical stereotype, if that’s possible, here’s a character who draws us in and then ever so gently lets us go by degrees. Excellent, too, is Andrew Schofield as Terry. As we know, Schofield is a fine comic performer with impeccable timing. Here however, he is allowed to breathe as an actor, to give his emotions full vent, and it isn’t a chance he lets pass by in any shape or form.

As glass half full Maureen, Catherine Rice turns in a decidedly impeccable performance, whereas relative newcomers Katie King and Bobby Schofield as punk daughter Bella and boyfriend Jamie show that their’s are appearances that’re bound to be repeated sooner rather than later.

It’s Jake Abraham though who all but steals the show. His St Cajetan is a total hoot, with Abraham’s skilled timing, delightful word smithery and deadpan expressions yet more to the performance.

If there’s a quibble it lies in the first half being in need of a little trimming here and there. Yet with this said, The Miracle of Great Homer Street is a fabulously fun night out, which will also provoke a lot of thoughts.