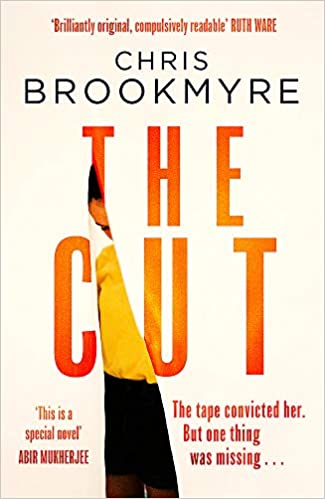 If versatility is a marker as to the skills of the storytelling writer, Chris Brookmyre again proves with The Cut  (Little Brown) that he is a master of his craft.

Told in both the present and retrospectively, here is a book, a standalone, that is guaranteed to have its readers second-guessing right to its tumultuous end.

Millie Spark can kill anyone. A special effects make-up artist, her talent is to create realistic scenes of bloody violence. Then, one day, she wakes to find her lover dead in her bed.

Twenty-five years later, her sentence for murder served, Millicent is ready to give up on her broken life – until she meets troubled film student and reluctant petty thief, Jerry. Together, they begin to discover that all was not what it seemed on that fateful night … and someone doesn’t want them to find out why.

As with all of Brookmyre’s novels – not least those being with his series of Jack Parlabane exploits – the characterisation is top-notch. Millie / Millicent is wonderfully flawed. The older and wiser Millicent has her defence mechanisms on high alert and, initially, we are not too sure whether to root for her or not. Her acerbic response mechanism, however, is a total joy. As we uncover more of her past through the younger Mille, we find a toughness, resilience and naivety that is both disarming and alarming in equal measure.

As for Jerry, okay. Being a petty thief may not be the most appealing of traits to find in a collaborator. Then again, thanks to some beautifully fashioned plotting, Millicent doesn’t know about Jerry’s darker qualities. This makes their union one made in fictional heaven, particularly as Milicent’s own secrets come tumbling out.

The detail in the transcontinental settings, the dialogue – which is peppered with dialectal nuances aplenty, but not so much as to detract – and, above all, the fabulously twisting, turning story itself, all combine to make The Cut a must-have addition to any discerning crime readers TBR List.