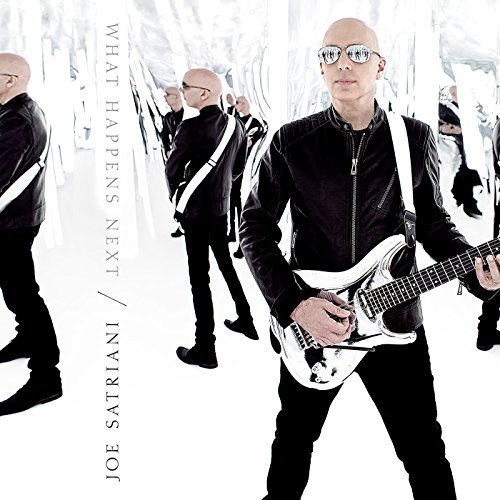 Superlatives are something the work of Joe Satriani – arguably the greatest technical guitar player on the planet – takes in his stride. As a result describing What Happens Next as astonishing doesn’t really do it justice.

And therein lies a problem: you almost want to dislike the album out of envy but simply can’t because it is genuinely that good, and instead find yourself forced into exaltation overload!

Let’s put it this way. If anybody other than Lionel Messi scores from the halfway line, it’s a wonder strike. If Messi does, well, it’s almost expected; almost dull. Joe Satriani right now, with this album, is the Lionel Messi of guitar playing: an atomic clock in an analogue timepiece world; a jet engine in a universe of bicycle transportation.

Anybody who loves the Rock genre, musicianship at its very, very highest level and who appreciates all that is great about the electric guitar, its versatility, movement and the player’s ability to captivate from track-to-track, will find What Happens Next is the go-to album for a long time to come.

It might have been over thirty years since the world was treated to Satriani’s debut album, Not of this Earth, but now on album 16, the man from Westbury NY has explored deliciously innovative ways in which to bend the strings into ever more astounding shapes and sounds.

What Happens Next is an album that transports the listener to a world of wonder and, in all honesty, even the sternest of aficionados  cannot ask for anything more than that from anyone.

The opening track Energy may “smell” of tracks past, but a closer listen tells both the fan and the newcomer to Satch’s mastery both that, no, not at all: this is new, this is daring this is … a purity of vision coalesced into a musical form unforeseen!

The force that seeps through every chord – not only on this track but on each in turn – is as though this is a guy revitalised, reimagined almost, the moment that Ibanez is in his hands so that he becomes intent on providing a freshness of playing others can only dream of.

Yet what really sets What Happens Next apart from Satriani’s back catalogue is its cool, stylised eclecticism. For every funk-driven Catbot, there’s a progressive flavoured Thunder High on the Mountain. For every stroke of delicacy that is Cherry Blossoms, there is a thumping, rip-roaring Headrush.

So there you have it: it’s so hard to be underwhelmed by the man’s brilliance that it’s quite overwhelming to find, if anything, that he’s got better, more audacious and far more jaw-droppingly beautiful in his composition than ever.

Thunder High on the Mountain