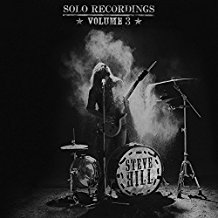 If you haven’t yet come across the amazing sound of Canada’s Steve Hill, then make it your business to do so with his third collection of superb cuts, Solo Recordings Volume 3. In fact had The Who not already cashed in on it, meaty, beaty, big and bouncy could be the album’s ultimate tagline.

Not so much just a great rockin’ listen, but more an aural slice of heaven, this is a disc that just grins and grimaces with rich equally proportioned exotically musical pleasures from first to last. Not only that, but the sound is so large, so fresh, it’s as though he’s playing right there in your very own music room.

This is a one man band – literally – who has the complete armoury to blow his listeners out of their seats. Hill’s voice is in turns dipped in granite and rough cut diamonds, as demonstrated on the gloriously defined debut single from the album, Dangerous (a song written about an ex who kind of had it in for him), then becomes seared with a deliciously evocative honey glaze on the magnificent Slowly Slipping Away; a mesmerically hypnotic offering delightfully underpinned by some luscious harmonica, that does everything but that which the title suggests.

In fact so diverse is Hill’s style, it’s as though he’s several different artists in one, rather than just the singularly solo expert he is in all he does. The album opener Damned is an out-and-out rock master class, whereas Still a Fool & a Rolling Stone is just jaw-droppingly, nerve shredingly, ear-blisteringly outstanding in its raw edged guitar majesty!

Old school blues, yes, but man is it delivered with a buzz-cut-to-the-bone resonance that makes you want to scream in adulation.

Rhythm All Over is a guaranteed showstopper for those due to see Steve Hill supporting Wishbone Ash during their upcoming tour and as for Smoking Hot Machine, bets are being taken right now on how long you’ll remain seated once this sultry, steamy, hot and sticky bundle of joy starts off: odds on favourite, by the way, is currently about 0.2 seconds.

Yet just as we think Hill is all about power, along comes Troubled Times which evokes the legacies of Dylan and Knopfler yet, and at the same time, is so utterly original it comes as close to perfect as you could wish for in its roundedness.

Emily lightens the mood a tad, its tongue-in-cheek lyricism raising yet more appreciative grins. The tub thumpingly awesome Can’s Take It With You is so complete with kick drum, vocal and guitar synchronicity it’s hard to remember the man’s doing it all himself.

Then, just as you’re gasping for yet more air, along comes the album’s killer track … Rollin’ & Tumblin / Stop Breaking Down. In an album of 12 tracks steeped in brilliance, as the highlight of the lot you can rest assured that this is something special indeed.

With the mellow and refined acoustic guitar underscoring Going Down the Road Feeling Bad and a thunderous Walking Grave bringing the album to close, all that remains to be said is “Bravo, Steve Hill!” This is going to be some album to beat an then some.