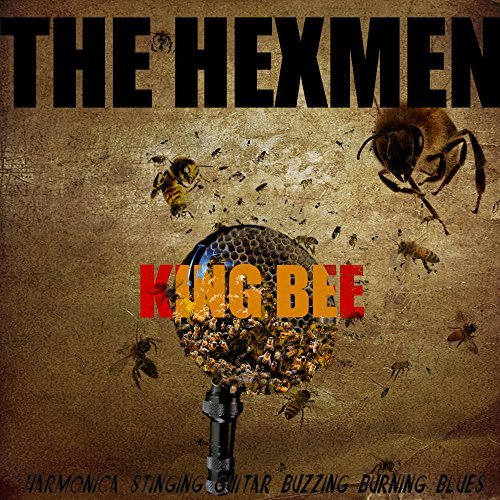 Just how much fun can be packed onto one CD? Ask The Hexmen because in a little under 43 minutes with King Bee they’ve filled a whole gig’s worth. Ripped with vitality, here’s an album that can only be played one way: LOUD!

Arguably not since AC/DCs Powerage – though admittedly in a very different way – has a band managed to capture what it is they’re all about in one album. The fire burns bright and the good times roll from the moment Baby Please Don’t Go bursts from the speakers. There have been many covers of this Muddy Waters masterpiece, but none have been so soaked in oil and set alight like this.

Then comes the album’s title track which, to put it mildly, is taken to a place The Rolling Stones could have only dreamed of in working it from the Slim Harpo original. George Wickstead’s machine-gun-hot harmonica, Ian Fuller’s Hendrix-esque guitar brazenness and Mike Cain and Mat Shaw’s thumping bass and drum rhythms nail the whole extravaganza into place with an acuity and authority only the very best can hope to achieve.

It’s time to slow down just a bit with Lonely Avenue and so bask in the glory of a band that’s so tight, so well grounded, so well skilled in what they do, it’s as though they’ve rocked up to play just for you and for you alone. Imagine Jake & Elwood at the door and you’re somewhere close to getting a similar feeling whilst playing this at Level 10.

The gorgeousness of the sound they create is undoubtedly helped by the fact King Bee was mastered at Abbey Studios and recorded The Motor Museum Studios in their home city of Liverpool. Yet it cannot be ignored that The Hexmen are one white hot outfit in order to even think about making music like this, let alone able to get it down and out on disc.

Messin’ with the Kid gets the party back on, with Fuller ripping it up to his heart’s content and underpinning Wickstead’s silky smooth, jet-fuelled vocals with some razor sharp playing, whereas 29 Ways demands a round of applause on its own; the dance inducin’, hand-clappin’, foot stompin’ jamboree of a tune that it is!

Hoochie Coochie Man again may have been covered to death, but my Sweet Lord o’ mine, do these boys rip it a new soul. Think George Thoroughgood’s Bad to the Bone mixed with Motorhead’s Ace of Spades but with subtlety (Yeah, right. Imagine that!) ratcheted up to 90+ on the Richter scale of brilliance and you’re somewhere nearby. Somewhere, that is, but by no means all the way.

Listening to King Bee is as exhausting as it is intoxicating. Bullfrog Blues is relentless, remorseless and irresistible, Come On In is out-and-out entertainment even your Gran wouldn’t moan about and Riding on the L & N, well, pass me that defibrillator nurse ‘cos my heart’s just gotten busted! What a joy! And then just when you think it can’t possibly get any better, along comes Smokestack Lightnin’ to round things off in all of its sultry, smoky, simpering glory.

The Hexmen: What can you say, in all honesty, to justify just how magnificent these guys are? Indeed, what anyone say to adequately describe just how magnificent King Bee as a whole is?  Here’s a plan though. Check this little honey drop of an album out for yourselves, then tell me I’m wrong if you dare!

Messin’ with the Kid