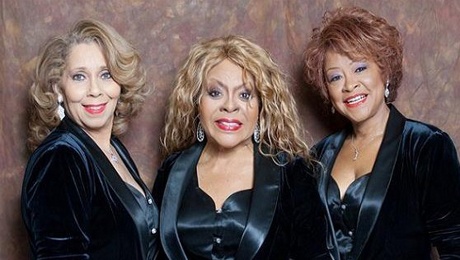 No matter what band, group or artist surviving 50+ years in the entertainment business takes some doing and, on seeing The Three Degrees at The New Brighton Floral Pavilion, the “must have” element is clearly Love: for the music, for their fans and for simply being on stage.

The Philadelphia Sound has boasted many great Soul legends; The O’Jays, Lou Rawls and Pattie LaBelle amongst them. Yet The Three Degrees, as they proudly announce, are the trio of female singers who have been recognised by Guinness no less as being the ones to have been around longest and their experience is plain for all to see, as is their enjoyment.

The Three Degrees were once touted as being Prince Charles’ favourites, with songs such as When Will I See You Again, Dirty Old Man and Take Good Care of Yourself making them as recognisable in the 70s as the heir to throne himself. Even Ron Atkinson named his dynamic West Bromwich Albion midfield trio of Regis, Cunningham and Moses after the group, in a move that might well be frowned upon to today, but was lapped by the ladies themselves at the time.

Yet what is most obvious about the evening is that all three are enjoying themselves. There are jokes and set scenes of banter aplenty, but perhaps a few anecdotes as to how their careers got to where they are would have been nice too.

Still, the evening is still one that oozes class and dates back to a time when, arguably, cabaret was king and intimacy was a given.

Closing on an elongated Boogie Wonderland has the audience leaving the Floral Pavilion with smiles on their faces, songs on their lips and an extra skip in their hearts. Job done by anybody’s standards!