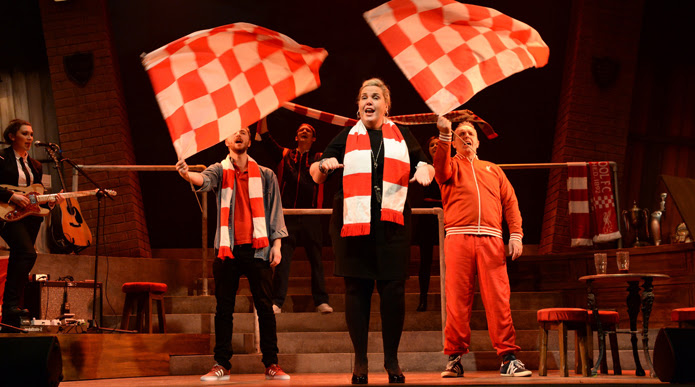 The Royal Court Liverpool pays host for the next month to Nicky Allt’s official history of Liverpool Football Club from Thursday September 28th. The smash hit show You’ll Never Walk Alone returns to the theatre for one month and if that isn’t enough for all Reds to get excited about, WE HAVE TWO TICKETS TO GIVE AWAY FOR A PERFORMANCE TAKING PLACE BETWEEN SEPTEMBER 28 AND OCTOBER 4.

From the Founding Fathers through two World Wars, to the dark days of the second division and the glory round the fields of Anfield Road, we witness the triumphs, the tragedies, the heroes and legends. From JK Houlding to Jurgen Klopp, Rome to Istanbul, this show will tell you an unrivalled soccer story: The Official History of Liverpool Football Club.

Starring Mark Moraghan, Jake Abraham, Lindzi Germain, Lenny Wood, Jamie Hampson, Daniel Ross and Howard Gray, this is a show perfect not only for the Reds fanatic in your life, but also for those who love their football history, more than a few laughs and a smattering of tears.

You’ll Never Walk Alone has sold out wherever and whenever it has been staged since 2011, with audiences revelling in the exploits of one of Europe’s most successful clubs. Even for those neutrals who simply love football and the passion that surrounds it, You’ll Never Walk Alone is a roller-coaster of a show that’ll have you cheering from stands by the time full time whistle blows.

TO WIN TICKETS FOR A SHOW BETWEEN SEPTEMBER 28 AND OCTOBER 4,  go to the Facebook Page at Chris High Reviews: Theatre, simply Like & Share the post then leave a comment. The winner of two tickets for this production of You’ll Never Walk Alone at The Liverpool Royal Court will be drawn Next Tuesday evening (September 26th) . Good Luck!!