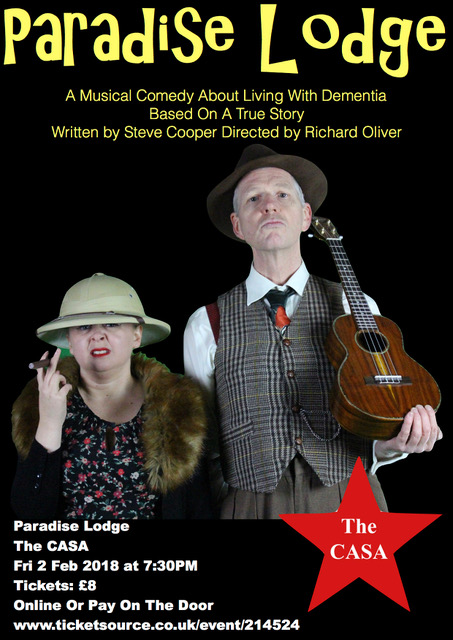 Based on a true story, Paradise Lodge, a thought-provoking and hilarious exploration of identity, reality, love and loss, which is at The Casa Bar on Hope street this Friday, February 2nd from 7:30, is written by Steve Cooper and Directed by Richard Oliver.

Vi, Ronnie and the other residents of Paradise Lodge care home are gathered in the big lounge to be entertained by Eric and Kylie, a dysfunctional duo called ‘The Doodlebugs!’. But Vi wants to join her husband and Ronnie wants to search for his kidnapped family. Trouble is, Vi’s husband is dead and Ronnie’s family just don’t visit.

Through a series of flashbacks and comic songs from the war years, Vi, Ronnie and the audience are transported back to a time when they thought they could live and love forever.

Rich, concise and uplifting, Paradise Lodge is the latest play to be put on at the Casa Bar, which is gaining a burgeoning reputation for hosting cutting edge, new plays of which Paradise Lodge is a worthy addition.

Tickets are just £8 on the door or from www.ticketsource.co.uk/event214524