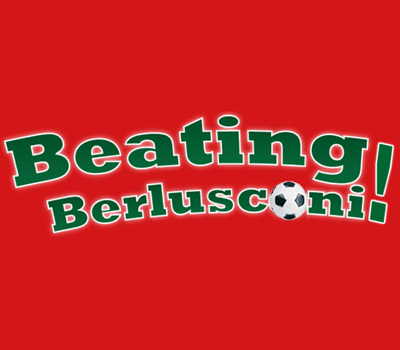 Following their impressive 5-2 win vs Roma at Anfield in the European Champions League semi-final first leg, Liverpool FC are on the cusp of their eighth European Cup final. A landmark which, potentially, could secure the club’s sixth European Champions title. There’s a fair way to go yet but no matter what happens, it’ll have to be some game to beat that which took place in Istanbul, 2005.

In the stadium that night cobbler and die hard supporter Mark Radley who, more than a tad fed up after 45 minutes, went for a stroll around the Attaturk stadium in an effort to clear his head and gain some perspective. Mark, however, somehow got lost and amazingly ended up in a secure area: the private box of Milan’s owner and then Italian president, Benito Berlusconi – who, fair to say, was more than a little smug at that point.

Beating Berlusconi is the story of that night. Written by John Graham-Davies and starring Paul Duckworth, the show is playing at The Blue Lounge of The New Brighton Floral Pavilion this coming Bank Holiday weekend, Sunday May 6th.

A one man show, Paul acts out all 40+ characters so creating a play which not only covers the events of that night in Turkey but also when the character of Kenny witnesses Liverpool, both as a club and a city, scaling the heights and plummeting the depths.

“I was working on Hollyoaks as an actor and used to go into this little key cutting place. I used to rent rooms to some of my colleagues who were forever losing their keys,” John explained. “I got chatting to Mark, who owned the place, and inevitably with this being Liverpool, talk soon turned to football and the respective merits of our two teams: his being Liverpool, of course, and mine being Huddersfield Town who, fair to say, were only just beginning their own resurgence.”

“After the final, I called in to congratulate him and asked whether he was able to watch it, to which he replied ‘I was there’. That’s when he told me the story of this weird thing that happened to him, of how he went in search of a drink and ended up in the AC Milan VIP suite.”

“Of course he had his colours on and, having found himself there, the guys in the box were naturally quite patronising. At that point, at least. Three up and seemingly coasting as they were. Mark got himself a drink and spotted a seat beside this little guy with slicked back, black hair. Being a bold Scouser, he went to sit down next to him, but security moved in to remove him only for this bloke to patronisingly shoo them away before patting the seat and inviting him to stay.”

“That was the germ of the play, which is used as the climax point that covers everything to do with being a football fan, a Liverpudlian and being an ordinary scouser.’

The play is about so much more than that match, as great a story as that in itself is.  Beating Berlusconi is about this one man, the fictional Kenny, who follows his team through thick-and-thin, watching them develop as he himself develops growing up.

“It’s about living through the 80s and 90s in the city. Kenny’s a kid back then and recalls how the city was demonised by Thatcher and the subsequent problems that came with it. The football isn’t detached from any of that or of being a Scouser. Kenny lives and breathes the games, but he’s very attached to the events that surround him at that time and tells the audience how the government’s actions impacted upon the people he calls friends and family. Those others who were similarly affected.”

Writing a piece that covers so many characters played by a single actor is a feat in itself, in keeping the various strands together. John was encouraged to create the piece in this way because he’d had his own experiences of performing in such a manner. His play Taking Sides recounted his time organising convoys of trucks travelling through war torn Bosnia and Kosova.

“Yeah that was a multi-role thing as well … but it was only eight!” he laughed. “From the moment I started writing, I knew Beating Berlusconi was going to have to be so much bigger. Just by the very way in which our guy interacts with people, there are occasions where Paul is playing three characters at the same time. So even when I was writing it I knew it was going to be incredibly difficult to pull off.”

“Luckily, The director Matt Rutter – who is now the director of the Young Everyman & Playhouse – told me about this guy who would be perfect for the role who’s name was Paul Duckworth. At that time, I didn’t know him at all.”

“So I got in touch with Paul and went along to see him at one of the first run throughs. He’d only been working on it for something like eight days, but even then I was absolutely gobsmacked. Not only had he learned the script, he’d also somehow managed to encapsulate each character, moment by moment, so we as an audience knew who exactly was being presented. It was just astonishing to watch.”

Beating Berlusconi has played further afield than Liverpool. One such notable place being Norway where it played before audiences totalling 3,000 people. “That was a fabulous experience. A guy came to see it when we put it on in London during the 2010 World Cup – under the mistaken impression that people would want to watch a play about football when the biggest football tournament in the world is going on, rather than watch the football itself. Anyway, this guy  absolutely loved it. So much so, in fact, he took it and translated it for this Norwegian actor who he said would absolutely love to do it.” 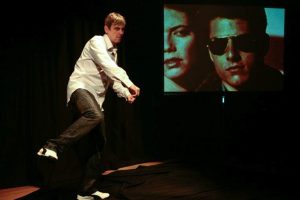 “There are a lot of Reds in Norway and they took that adaptation right up to the edge of the Arctic Circle, with Finn Arve Sorboe playing the role. He’s very different to Paul, but nevertheless absolutely nailed it time and again. Of course they had to take out some of the local political references, but in essence it was absolutely the same show. Then while it was there, someone from Italy saw it and wanted to take it there too. That production was put on in Rome, in Italian, around five years ago now. So yeah, it’s travelled far further than anybody anticipated.”

“We got some very nice reviews in Italy, with some people comparing the writing to Ken Loach’s work on account of its grittiness. To be frank, though, I don’t think Loach goes in quite so much for comedy and I’m still waiting to find out what Berlusconi thought of it.”

First and foremost, John is an actor. As such there are inevitably periods when work is scarce so it’s always as well to have a second string to the bow, as it were. John’s is being able to put words onto paper so as to create hit plays. “My first proper attempt was in fact Taking Sides, which I took across to America and Russia and Albania, as well as Kosova and Bosnia. So it’s proved useful when there isn’t any other work in the pipeline to have writing to fall back on. It’s quite handy having a one man show in the back pocket. A lot of actors do, although a lot do literary or theatrical biopics. I just chose to write something born from my own experiences travelling to Bosnia.”

John’s wife is performance poet and writer Alison Down, and the pair are about to embark on a duel writing project. “It’s also sports related, about this amazing factory girl called Doris Storey from Leeds who went on to win two Empire Games gold medals for breast stroke in the 1930s. Doris had also been picked for the so called “Hitler Olympics”of 1936 in Berlin, in which she finished sixth remarkably having fractured her arm after a fall following the semifinals. While at the games, though, she absolutely and steadfastly refused to give the Nazi salute whenever Hitler came in to watch the events. We’re aiming at having that put on, hopefully, in 2020. If the marriage survives, of course,” John laughed.