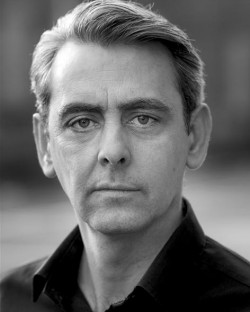 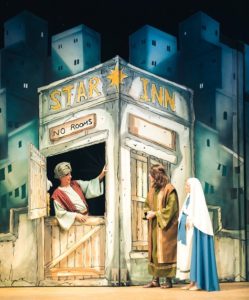 Ahh, Christmas! That time of year when families gather around, laugh, eat, drink and be merry. When bad jumpers are cool and its okay to get kissed by your Granny. Quite often, apparently. It’s also the time of year when even more fun and frolics are to be had at The Liverpool Royal Court Theatre.

So hang on to your mangers, as pretty much nobody ever says! Ever!

It’s Bethlehem, 0 AD (or 0 BC … whichever, its a while ago). Terry, a lonely shepherd looks out over the land and sees that all is good. Apart from that bloody great star. He should probably take a look at that.

Being a shepherd though, Terry isn’t a natural leader,  more of a follower, so off he trots to see what adventures the star might take him on … or not … depending on what’s happening down The Herod’s Arms. Well, it is Christmas after all!

“It’s absolutely fantastic being back at The Royal Court for Christmas; it’s like playing out with my mates,” Paul Duckworth laughed during a break in rehearsals. “This role is great because, in all fairness, I’m playing the ultimate Christmas villain in Herod; a guy without too many redeeming features in all honesty. He’s a power mad, greedy, self-righteous egotist who really could be in power today, never mind back in Bethlehem Year Dot.”

With this being The Liverpool Royal Court Christmas show though, there’s been the inevitable twist put on proceedings to soften the

harshness of Herod’s, shall we say, less family friendly side . “He’s pretty much the outsider; the kid who wants to belong. He’s also the one who’s least ‘Scousiefied’, if that’s a word!? On top of all that, he’s got a thing for the mother-to-be, which is an image nobody really wants at Christmas or any other time!”

With this being a new script, and although things are pretty well formed by the time rehearsals start, there is some room for manoeuvre and the cast get to play around so that the show becomes what it is we see on stage. “The cast put their own little stamps on things, for sure,” Paul explained. “Nothing is set in stone when we first get hold of the script, but the template’s there so we just try and make things work as best as we possibly can, scene-by-scene, with Cal our brilliant director. We have to get the most out of the gags and its always great fun seeing things develop.”

This is Kevin’s second authorship of The Royal Court Christmas show, following last year’s hilarious Scouse of the Rising Sun. 2017 has seen Alan Stocks write Father O’Flaherty whereas Lynn Francis, Lindzi Germain and Angela Simms united to write The Royal which was restaged at the theatre recently and, again, to rave reviews all round. In 2018, Mam, I’m ‘ere returns, written by Paul’s fellow cast member Stephen Fletcher.

Does Paul have any designs on writing a play of his own? “I wouldn’t mind having crack at some point, yeah, but there’s nothing there at the moment. I’ve had a few ideas over the years about things I think would make good stories but at this point its pretty much a case of watch this space.”

Once Scouse Nativity draws to a close in January, Paul’s attentions will switch to his being involved with the new Everyman Rep Company from Spring 2018. “I am really excited about that,” Paul said. “I auditioned for last year’s company but I already had work that clashed with a few things. To be involved this time around is a huge thrill. It was useful watching how that first year panned out and I was able to ask some of the guys involved, like Keddy [Sutton, who is also in Scouse Nativity] what it involved. I heard nothing but great reports about how everyone enjoyed being in that first season, which has made me look forward to joining the company all the more.”

“I had to apply, get seen and go through the exact same process as everybody else. Like anybody, I was nervous like you always are before any audition. I was interested in all four shows but it was A Clockwork Orange that really caught my eye. I’d never read the novel and only knew the film which I know Anthony Burgess sort of disassociated himself from when it came out which is sort of ironic because, as it it turns out, I’m not actually in A Clockwork Orange.”

“I am in Paint Your Wagon, Othello and The Big I Am which is the new Bob Farquhar play adapted from Peer Gynt. They’re all going to be pretty big shows. In fact Peer Gynt and this new adaptation of it has loads and loads of characters, so the whole company is involved in that one. The story also travels from Liverpool through to Afghanistan and on to Vegas by way of several other destinations so it’s going to be pretty impressive on a number of levels I can tell you. And one hell of a challenge. Not only for the cast but for the crew to get everything ready between matinees and evenings is going to take some doing.”

So from travelling the world in one show in the future, back to times past, the ‘Greatest Story Ever Told’, Scouse Nativity: what can an audience expect? “The usual: funny gags, great characters, ridiculous slapstick and lots of Scouse references. There’re some great musical numbers in it, with The Royal Court Choir doing their thing at one point as well. On top of all that there are some of the most tremendous sets I’ve been lucky enough to work on. Well, I say ‘work’. What I really mean is ‘turn up and have a fantastic time with my mates, night after night’. It’s great fun and I’m pretty sure audiences will think so too.”

And with that we’re back where we started, only with Christmas just that little bit closer at The Liverpool Royal Court Theatre.