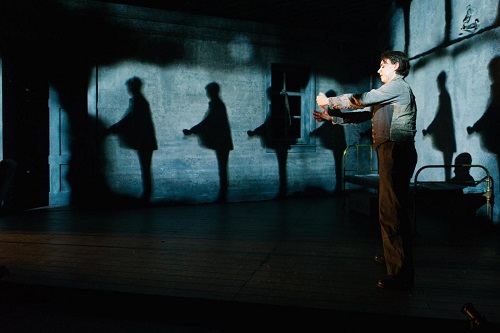 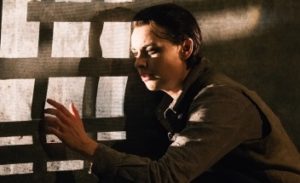 Man to Man, which is running at the Liverpool Everyman until Saturday, is nothing short of exceptional. The cliché of emotional roller coaster may well have been coined for plays such as this. Directed by Bruce Guthrie and Scott Graham, the physicality of the piece is astonishing, although the plaudits have to lay firmly at the feet of its sole actor, Maggie Bain.

Manfred Karge’s  masterpiece tells the story of Ella; a woman forced to adopt the identity of her dead husband in order to survive in Nazi Germany. Compromising her own identity for survival – even at one point becoming a guard in the feared SA – Ella is plunged into a new masculine world of beer, schnapps and poker; a claustrophobic existence dominated by the fear of discovery and the changing face of authority in a volatile twentieth century Germany.

Put simply, this is a thing of beauty. A visceral, gut wrenching portrayal of a life lived in fear of discovery, isolation and loneliness.

A life filled with what ifs, peppered with surrealist imaginings that torture and torment the protagonist throughout its 75 minutes .

As Ella, affecting a Scots brogue when adopting this persona whilst switching to enunciated English and Cockney twang for others, 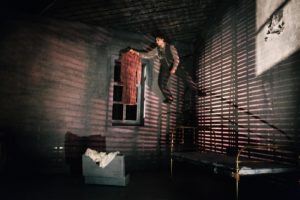 Maggie Bain is incredible. Inhabiting her character, Bain bleeds pathos and sweats angst with such abandon it is impossible not feel every barb her predicament presents and yearn for her release from this tortuous existence.

A performance of consummate skill, it will be a long time before we see it equalled, let alone bettered; the sheer dexterity and necessary timing the role demands deserving in itself nothing more than rapturous applause.

Special mention should go to the design of Richard Kent, whose angled stage begs claustrophobia, whilst the lighting brought to the whole by Rick Fisher and the sound coordinated by Mike Walker heap yet more layers of confinement upon that which is taking place. In turns Bain is sitting subdued, the next quite literally scaling the walls to lean forwards at improbable angles; her character’s mental stew chronicled through the highs and lows of her day-to-day routines as she takes us through nearly fifty years of German life.

Then there are the surrealist projections created by Andrzej Goulding, which time shift and hold us still in time beautifully. Art in themselves, but brought to light with such dynamism it is astonishing to behold.

Poignant, poetic and pulsating, Man To Man may, due to the construction of the set, have a reduced capacity audience but, nevertheless, with the best will in the world, it is recommended you beg, steal or borrow to see this for yourselves. You will not be disappointed.