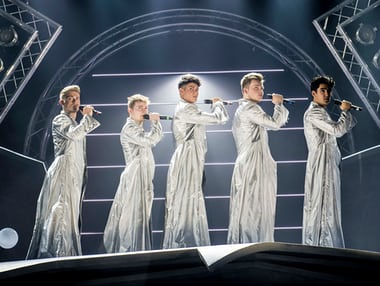 Well. Take that! Just when you thought all the surprises in the Juke Box Musical Theatre box have been used, up pops The Band, the musical based around the music of Take That which is at The Liverpool Empire Theatre until February 3rd.

And what a joyous, fun-filled and seriously massive extravaganza The Band is too, aided and abetted by more than a few fine tunes. In fact its pretty safe to say this is a show so crammed full of everything, even non-TT fans will have aching faces from smiling so broadly.

Tim Firth has come up with nothing short of gem in this script not only because because he’s actually created a story for such a vehicle, but also because the zippy dialogue helps us identify with each of the characters so willingly.

Added to this are a superb cast headed by Faye Christall as Young Rachel and Rachel Lumberg as her elder counterpart. Both are faultless in bringing depth and feeling to their roles, so its as if their stories are being told to us individually in the way a friend shares a special secret.

Read the interview with Faye Christall

We relate to all of the characters on different levels, of course, but because we see both Rachels mooning over their heroes or contemplating their older life in turns, its these two that carry the weight and they both do so outstandingly well.

All of the younger actors are excellent but its Katy Clayton’s young, promiscuous, loud but ultimately insecure Heather and Rachelle Diedricks in the role of Debbie, the catalyst for that which follows, who stand out. And boy can they all sing, as proven during a truly moving, stripped back version of Back For Good which leaves barely a dry eye in the house.

Of the adults, Alison Fitzjohn as Claire brings the morals to the table without ever using a trowel to lay them with, whereas Jayne McKenna’s once bookish Zoe and Emily Joyce’s Heather each light up the stage brilliantly with their spiky digs.

There should also be special mention made of Andy Williams as Every Dave and Martin Miller’s delightfully understated Jeff, Rachel’s partner, who both deliver some quite delicious asides that will have you tittering away endlessly.

As to The Band themselves, Five To Five were chosen by the public during the talent search that was Let It Shine on the BBC in 2017. It’s easy to see why, too. Not only are they clearly relishing the spotlight, thanks to Kim Gavin’s skilled choreography their dance moves are as slick as oil on water, while their vocal prowess does more than justice to some of the most memorable songs ever recorded.

The set – as with just about everything else – is ginormous. There’s planes, statues, buses, bedrooms, school changing rooms, police stations, arena auditoriums, big screens, cascading staircases festooned with vast lighting rigs, flames, vari-lights aplenty and even mountains appearing at every turn. As a result the action whips along at one heck of a pace and for a full ninety minutes of breathless fun.

True The Band offers oodles of schmalz and a good dollop of cheese. Ultimately, though, there’s also the guarantee of a damn good night out, so go get tickets then prepare yourself to be a lot more than pleasantly surprised by what is a show that truly shines.

The Band is at The Liverpool Empire until February 3rd.
For tickets click HERE