A L Gaylin is the author of some of the best written, most compelling and beautifully crafted thrillers around at the moment. Her series of books featuring Brenna Spector – the Missing Persons Investigator with perfect recall – sees the author writing under the name of Alison Gaylin and has seen her receive a host of awards for a series including And She Was, Into The Dark  and Stay With Me. Her latest standalone is If I Die Tonight and here she is having a chat about all things social media, and Brenna, with Chris High. You can read the review of If I Die Tonight here

A large part of If I Die Tonight is a comment on social media. What for you – particularly as an author – are the good and not so good parts about the whirlwind that is Twittersphere etc.

I like writing about the things that scare me most, and as far as social media is concerned, what scares me most is its remarkable ability to destroy people at lightning speed. A lie can take hold and get repeated so often that it becomes “fact,” all in a matter of hours, and because things posted on social media are both instantaneous and permanent, a person can be branded with that lie forever. One simple google search and up it comes. In the book, Wade becomes infamous overnight – literally – as a result of that lethal mixture of small town gossip and social media.

Pearl Maze is a beautiful and well developed character. How did she first appear in your plans and how did she develop?

I’ve always been haunted by the stories I’ve read about toddlers picking up guns and accidentally killing a parent, and I’ve long wondered about what that effect that would have on the child. In writing Pearl, I saw an opportunity to introduce that idea. She is a basically good and moral person and a keen judge of character, yet she already has this glaring strike against her, and has felt guilty and at a loss for it ever since she’s been conscious. She is, as she describes herself, “a murderer before she could even read.” So, in writing Pearl, I imagined what toll that could take on an otherwise level-headed person, and came up with a complicated young woman who tends to isolate herself from others and copes with a lot of personal demons but still has this core of goodness. I’m glad you liked her, as I really enjoyed writing her!

Loyalty and inner trust are something that are constantly questioned in the novel. Particularly within the family unit. How much was writing this as a theme a question of “there but for the grace of God go I” and what did you learn from writing this family dynamic?

Yes, the idea of children keeping secrets from their parents is a topic I keep coming back to in my writing, and as the parent of a teenager it has special relevance! The one thing that I wanted to explore while writing the characters of Jackie and her two sons is the strength of the love a mother has for her children – and the sometimes misplaced belief that they are good people, that they can do no wrong. As classmates, strangers on social media and even Wade’s younger brother Connor all suspect that he is guilty of the hit and run, Jackie’s faith in him barely wavers. Whether or not her absolute trust in him is founded is a big question throughout the book.

You must have been delighted with your first stand alone What Remains of Me and the response it has received. How does writing stand alone novels differ from writing the Brenna Spector series of books?

Yes, I was, and thank you! While I’ve loved writing the Brenna Spector books, writing standalones has been fun and very freeing. Starting fresh with a whole new crop of characters and a new setting enables me to tell stories I can’t really fit into Brenna’s life/mindset. Plus, writing non-Brenna books, I can write characters with faulty memories, which still feels like a luxury! Another interesting aspect of writing a standalone is that there is no safety net. There 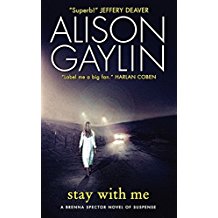 isn’t a single character that needs to survive beyond the end of the book, which allows for more uncertainty and drama. That said, I also enjoy the familiarity of writing a series, coming back to the same cast of characters and showing how events have changed them.

I say If I Die Tonight is a stand alone. Is Pearl making a return?

I’m so happy you liked Pearl and I’d love to bring her back! I’m actually thinking of bringing her in as a minor character in the book I’m currently working on, Closure, which is another standalone.

And how soon before Brenna is back before us? Now you have taken a break, how differently do you think you’ll approach writing her narratives?

Well, I’m writing at least one more standalone before I come back to Brenna, and when I do, I’d like to bring her up to present day. Since the three Brenna books take place in 2010, that would mean jumping ahead a decade. Her daughter would be an adult at that point, her assistant Trent would be the father of a 10-year-old… And yet the events of 2010 would still be as fresh in her mind as ever, because of her hyperthemesia. It would be a really interesting situation to tackle. 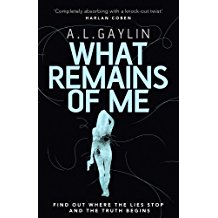 It has been a bit of a whirlwind over the past few years. What have the biggest / best / worst parts been?

Completing the Clea trilogy in the Brenna books has been a highlight, as well as jumping to standalones. I feel very gratified to have been nominated for an Edgar twice during this time – once for Stay With Me, the final book in the Clea trilogy, and once for What Remains of Me. I’d say the best part has been finding publishers both in the US and the UK who are open and supportive of the very disparate stories I’ve written. The worst? I’m not sure! As long as I’m getting paid to tell stories, nothing seems all that bad!

Is there something you would like to see introduced to encourage other writers from a younger age? In the UK, creative writing is being more and more encouraged. Is it the same in the USA?

Actually, it’s not. In my daughter’s school, there has been much more of an emphasis placed on analytical writing – which is, of course, very important. But it seems like creative writing is viewed more as a hobby. I feel like we tell some of our greatest, deepest truths through fiction, and I’d love it if it were taken more seriously in the states.

How do you go about planning a novel that’s as complexly intriguing as If I Die Tonight? Is it more or less mapped out before you begin writing, or it is something that tends to evolve during the process of writing the initial draft?

I come up with the characters first. I figure out their backgrounds and their secrets and how they all feel about those secrets coming out. With If I Die Tonight, I knew what had happened on the night in question, but figuring out what brought everyone there was something that evolved as I was writing the book. There are a couple of reveals that came to me really late in the game. I love writing a twisting plot, but this is probably my most character-driven novel. A lot of the twists come out of characters lying to each other and to themselves.

Are there any up and coming authors you would recommend, what’s your favourite debut novel of the past year and what do you learn from other people’s work?

I really enjoyed Sheena Kamal’s debut novel, The Lost Ones (It’s called Eyes Like Mine in the UK). She introduces a terrific new character, Nora Watts, who is very complicated, troubled, smart and compelling. It’s a really dark and original PI story that also tackles some timely social issues. A fresh approach to the genre that I loved.

A L Gaylin IF I Die Tonight is available now. To Order Click Below.