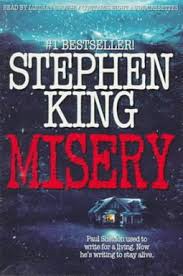 ”No, but I’ve seen the movie with Kathy Bates,” is the general answer to my inquiry as to whether a fan of Stephen King has read Misery. My response is generally always the same: “NOOOOO!!!! Read the book!!!!”

Why? Well, books are usually always better than the films regardless (a notable exception being another King classic, The Shawshank Redemption, which is in my top three of films and is short story so technically not a book), but also because there are around six characters too many in the movie.

Cards on the table, the film is good. Very good. However, the claustrophobic terror the ensnared writer feels throughout the novel is sadly lost.

Misery Chastain is dead. Paul Sheldon has just killed her – with relief, with joy. Misery has made him rich; she was the heroine of a string of bestsellers. And now he wants to get on to some real writing.

That’s when the car accident happens, and he wakes up in pain in a strange bed. But it isn’t hospital. Annie Wilkes has pulled him from the wreck, brought him to her remote mountain home, splinted and set his mangled legs.

The majesty of this book is the developing ‘relationship’ between captor and captive, as each grows an unprecedented level of cunning to maintain their status. As a result, the tension becomes tangible as each outwits the other, with emotional fissures becoming canyons as each page flutters past.

The dialogue is swift, snappy, sarky and and seminally King, with Sheldon’s intervening hacking of Misery’s Return in itself worth a read (I didn’t first time, did the second and have done on the multitudinous times I’ve picked the book up since).

There are also moments that King embeds a sense of sympathy for the nurse. A fragmentary few occasions when Annie is nothing more than a lost and lonely soul, who’s only wish is to live in the Victorian world of Misery Chastain: the only person ‘alive’ she trusts and reveres.

Paul is beautifully crafted. A man about town, with a streetwise arrogance seeping from every broken fibre of his being at first. Then the dawning of the horror that all the streets smarts in the world will be pretty useless, his vulnerability and weakness is revealed. This is King’s masterstroke. We don’t like Paul much, but we fear Annie more.

Stephen King’s Misery is a masterful piece of thriller writing that holds everything a fan of creeps, crawls and chaotic mindsets could wish for and more.

A word of warning though: Have at least a bottle of wine at hand. It’ll be a long, long night of reading once you pick it up.