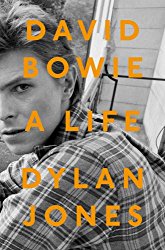 As much as anyone can be an expert in all things David Bowie, author Dylan Jones – aside from sharing the cultural icon’s real surname – certainly ticks all the boxes. An author of extreme knowledge and understanding, Jones’ take with David Bowie: A Life has been to listen to those who knew him – either intimately or in passing – and related their tales in and alongside Bowie’s own thoughts and commentaries regarding certain situations.

Does it work? For the most part, yes. The book covers young David Jones’ somewhat staid childhood, analyses his determination to learn then relearn ‘himself’ so as to project an image of unfathomable uniqueness. The book examines the influence other artists, musicians, dancers and fashionistas had on him before he grew into the legendary figure he became that in turn influenced them.

As insightful and intriguing as the information and insight is though, what it singularly fails to do is provide any impression whatsoever of the man. If you’re looking for a book that unearths any kind of impression as to what made Bowie tick, then look elsewhere.

In all sincerity, though, this is not the fault of the author. The enigmatic manner in which Bowie lived seems to have shrouded his life to the extent where his ‘reality’ differed in such a chameleonesque manner he was a different person to each individual he met.

In short, it appears that nobody really knew Bowie or at least if they did, they’re keeping quiet!

Warm, charming and friendly with some and somewhat cold and calculating with others, Bowie’s charisma was such that he could seemingly ‘blag’ his way out of just about any situation, whilst at the same time laying down another layer of inscrutability beneath which to hide his true persona.

Yet at no point is there a moment when it can actually be decided to like or dislike Bowie. Admire him, his work and what it stands for and transcends, yes. Like and dislike though, are a left a little out of reach.

Bowie undoubtedly brought a blaze of colour into the otherwise monochrome drabness of 60s and 70s Britain in a way, arguably, no other artist or performer had until that point. Yet it is his almost inaccessible true self that makes the man what he is and perhaps it is all the better for his legacy that Dylan Jones has left more than few of these stones left unturned.

What the book almost certainly does though is make its readers turn all the more readily to the man’s almost incomparable back catalogue and turn the volume up just a little higher having read it.

To Buy Dylan Jones’ David Bowie: A Life Click Below