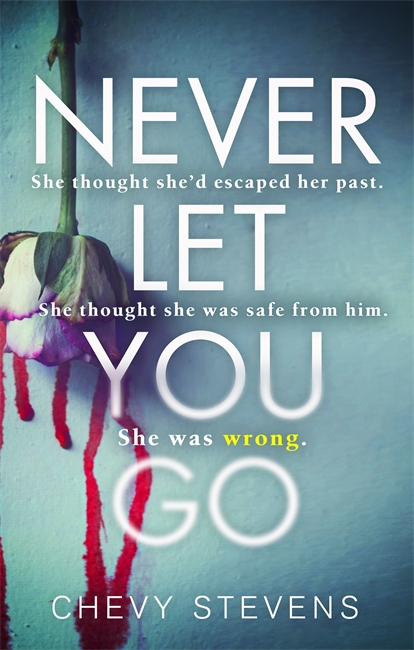 If you enjoy a good read then look no further than Chevy Stevens new gripping psychological thriller Never Let You Go.

Eleven years ago, Lindsey Nash fled into the night with her young daughter, leaving an abusive relationship behind. Her ex-husband ended up in jail and Lindsey started a new life. Now, Lindsey is older, wiser and believes she has cut all her ties with the past. But when Andrew is released from prison, strange things start happening. Lindsey’s new boyfriend is threatened, her home invaded and her daughter followed. Her ex-husband denies all knowledge, but Lindsay is convinced he’s responsible. Because, after all, who else could it be?

The story is split into three parts beginning with Lindsey and her relationship with Andrew, their early years and when the changes in Andrew’s personality begin. Lindsey’s desperate attempts to get away from her violent husband and to protect her young daughter Sophie is at points harrowing to read. We read the accounts from Lindsey’s point of view, which allows you to really feel her fear and her desperateness to escape. Her fear for Sophie and the guilt at having to take her away from her father who would never hurt his daughter.

Stevens then jumps forward to eleven years later where we see Lindsey and Sophie, their lives very much more settled and normal. The point of view switches from mother to daughter, giving the story a different take as we see the muddled thoughts and emotions of a teenage girl, her inner battles with her feelings towards her mum and her confusion about her dad, released after eleven years in prison and desperate to make contact with his daughter.

The third part of this story is where Stevens really picks up the pace and leaves the reader thinking that maybe not all is as straightforward as is it appears to be. She leads her characters into even more peril and is compulsive reading to get to the end.

Just when you think you know where the story is going, the plot takes an unexpected turn that leads to a very dramatic conclusion. Stevens’s characters are very well written and with the alternate voices of Lindsey and Sophie, it gives the story a real sense of urgency.