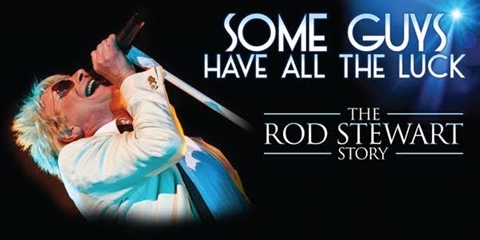 45 years since Rod Stewart wrote and recorded the hit song Maggie May and hot on the heels of Rod’s recent acclaimed album Another Country, a new theatrical production Some Guys Have All the Luck  is selling out in venues across the UK and the visits The Manchester Palace Theatre on Saturday 7 October!

Featuring songs from Rod’s time with The Faces as well as a full concert production with classic hits including Baby Jane, Da Ya Think I’m Sexy, Sailing and You’re in My Heart. Some Guys Have All the Luck  is guaranteed to rock the audience well into the night.

The show celebrates the career of one of rock’s greatest icons, Rod Stewart. From street busker and gravedigger to one of the globe’s most flamboyant, enigmatic international superstars, Some Guys Have All the Luck charts the rise of one of the most dynamic performers in rock history, warts and all.

Playing the part of Rod Stewart, Paul Metcalfe delivers both an authentic and charismatic performance, from the distinctive vocals to the swaggering showmanship and sheer fun that has made Rod one of the most loved performers of all time. This new musical charts Rod Stewart’s career chronologically and highlights some of the significant strokes of luck which helped the rock legend during his stellar career.

“Stewart’s life has been graced with significant strokes of luck along the way and I’ve picked out some of these as key moments in the new show,” Paul Metcalfe said.  “Rod has made the most of this luck combining it with hard graft and talent and I feel as lucky to be performing his current songs as much as the classics.”

A night that sure to have more than a few surprises, Some Guys Have All the Luck is a must see tribute to one of the world’s finest ever exponents of great time showmanship.

Some Guys Have All The Luck