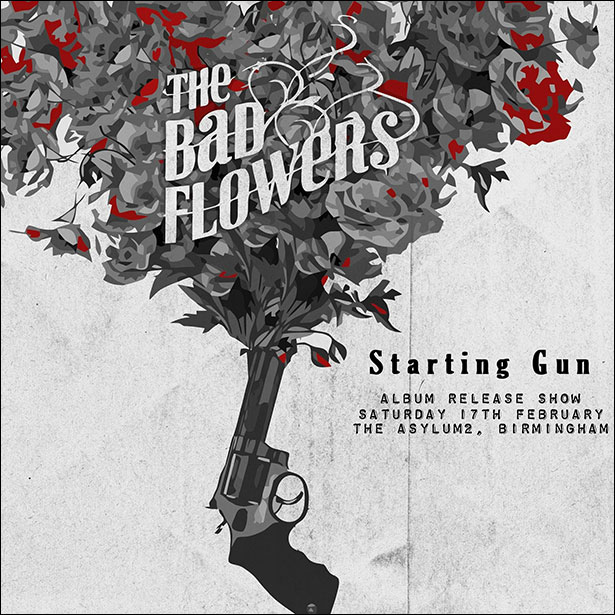 It’s always good to hear a new band get their debut off the ground. It’s all the better when that debut is as memorable as that of The Bad Flowers’ Starting Gun.

The first of the 11 tracks is the single Thunder Child which has been receiving some pretty decent airplay across the Rock Radio stations. Rightly so, too. This, for the uninitiated, is a tremendous taster of exactly what The Bad Flowers generate, with Tom Leighton’s power vocals and storming guitar soaring high. Yet this isn’t a track that’s all bang. There’s a delicious subtlety here as well, which gives it layers beyond the norm.

Lions Blood is an anthemic gold mine which gives at every fresh seam the trio choose to prospect next. Dale Tonks’ thumping, metronomic bass and Karl Seleckis’ superb drumming give Leighton an even stronger platform from which to launch his talents, making this a crowd pleaser many will be delighted to hear live during their upcoming tour as guests of both Stone Broken and Jared James Nichols.

It’s not just the style and passion of the music, either. There’s also the classiness of the songwriting that marks Starting Gun as an album to savour. Rich Man and its philosophical view of materialism is a fine example, with a rocking beat hammering out its message as though a piece of molten metal being remorselessly crafted into something shimmering and wanton.

On the flip side of the coin there is the delicious beauty of I Hope, with its laid-back personal intonation truly resonating through the acoustic backing like cool water on a hot day. A reminder perhaps of Poison in its sound, I Hope is a contender for track of the album.

Yet that honour must go to the rip-roaring, gut-wrenching delight that is Be Your Man. Boy, is this a white-hot, laying-waste-to-all-that-stands-before-it number or what? This is where The Bad Flowers as a unit show their true potential to be up there amongst the big boys, sooner rather than later, its rhythm and energy simply boiling up into a stew of musical Michelin star delights as we listen on.

Closing on City Lights sees Starting Gun signing off on the highest of highs and The Bad Flowers leaving their audience exactly where they should: eager for more and baying for Album Two.