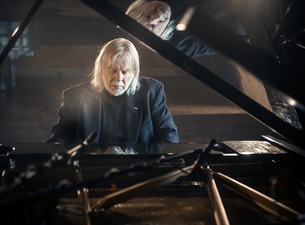 Not so much the cold, curmudgeonly uncle of the Grumpy Old Men personification but more the warm, welcoming Werther’s Original granddad. Rick Wakeman took to the stage­ – sans cape, hat or fanfare – and delighted the packed auditorium of The New Brighton Floral Pavilion with two hours of sublime piano music and tales from a career stretching across five decades.

As a deeply thoughtful man, Wakeman’s charm oozes out like warm water through a spa wall. His easy manner to introducing the tunes he plays a prelude to the sheer magnitude of his capabilities. After the Ball, from the Yes-man’s soundtrack to the 1976 winter Olympics, is a swirling, swooping delight that transports his audience through the mists of time to settle comfortably once more in front of their TVs watching John Curry  win gold.

The night is littered with duel, back-to-back performances, with superlative versions of Help in its originally intended ballad form, and Eleanor Rigby played a la Prokofiev,  co-joining seamlessly it is as though they were written together not years apart

It’s all too easy to forget that, outside of his extensive solo and Yes work, Rick Wakeman has worked with the very best. Marc Bolan is one with whom he collaborated extensively, Bowie too.

It is also easy to forget Rick Wakeman is a rock star, as he acts like an ordinary bloke who’s worked hard to get where he is and is thoroughly enjoying the destination of the stage he inhabits so comfortably. His love of music shines bright, along with the deep love and respect in which he holds his parents and his father in particular. An influence from his boyhood, a rendition of Summertime from Porgy & Bess in the style of a duet in which we’re asked to imagine his father ‘seated beside him’, is as masterful as it is poignant.

A duel rendition of Morning Has Broken,  upon which Wakeman played alongside the then Cat Stevens way back in 1971, and Amazing Grace have the runs slipping notes out like fresh rain from each, so refreshing are they to listen to. There are also more showy moments to enjoy during the gig. A medley of nursery rhymes in the styles of different composers – including the great English composer Dawson … Les, that is – is a treat, as is the performance of Sweet Georgia Brown. There are comical anecdotes recalling Norman Wisdom, a neighbour of the musicians on the Isle of Man and a great friend and an ill fated gig in America that has quite a lot to do with alcohol and a Wurlitzer.

Yet it is the tribute Wakeman pays to Bowie with Space Oddity and Life on Mars that will forever remain in the memory. The passion with which these two classics are performed is clear, and each is so precise you cannot help but imagine the late, great singer and artist smiling down fondly in approval.

Rick Wakeman is, without question, a music genius; a music man who’s work and career brushes shoulders with arguably more great artists alive or dead than any other; a modest jobbing Joanna man and a rare and beautiful talent that is such a joy to watch and listen to.