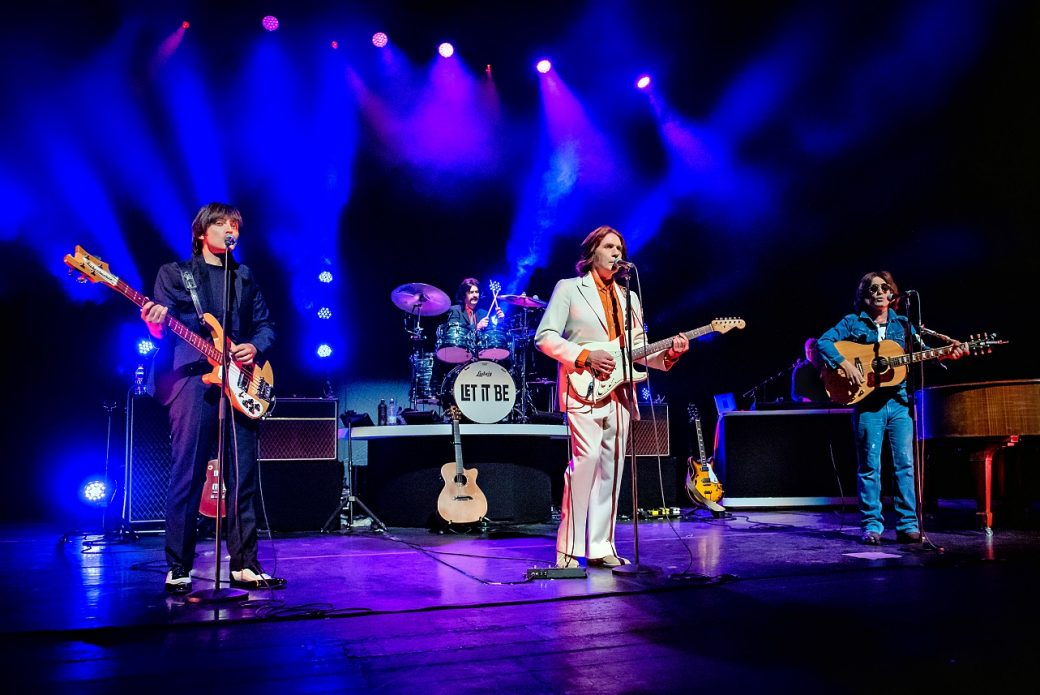 It’s a failsafe concept – marshalling as many crowd-pleasing Beatle songs into one show. No wonder Let it Be is a sell out success.  It’s just one long Beatle-fest  party.

The first half of the show, at the Liverpool Empire, concentrated on key moments in the Beatles career, with four old fashioned  tv screens depicting  scenes from their early days and moments from history. We heard quotes from each of them, bringing them nearer to our hearts, whilst watching what is essentially a tribute band on stage.

The fab four, Paul (Emanuele Angeletti), John (Michael Gagliano), George (John Brosnan) and Ringo (Ben Cullingworth) kicked off with a rollicking She Loves You, four mop tops in smart dark grey suits, before moving on to I want to Hold Your Hand depicting their Royal Variety Performance of 1963 and the famous quip for the rich to rattle their jewellery from John. The tv screens  televised the royal occasion, bringing the ocassion to life.

Manic scenes from the Shea Stadium followed when the four hit America with back projections  showing the ecstatic reaction of American youth to our home grown boys, as they ratcheted  up Help.  Amusing American adverts filled the tv screens, including ‘You’re never Alone with a Capstan full strength’ showing a bride take one at her wedding! How times have changed.

The Empire audience acted as the group’s ‘whole of time’ audience, and by 20 minutes in they were on their feet.

The show took us through their hippy era with our four in Sgt Pepper coats and moustaches, to their last appearance on the top of the Abbey Road building in 1969.

The second half concentrated on songs made singly and together – the show that never was, giving the fans the opportunity to imagine what could have been. John singing a haunting rendition of Starting Over seemed to encapsulate this period of their lives.

Angeletti is an accomplished Paul McCartney, having played him in Let it Be since 2012, touring the world with the show, and before that was in a Beatles tribute band the Apple Pies from 2000. Although he is not the spit of Paul, he has his mannerisms, his voice and his and his attitude. A natural  righthander he taught himself to play left-handed for the role.

Michael Gagliano as John Lennon, is a singer/songwriter and has honed his performance as John for 15 years.  His is a very believable performance as our own John, chewing gum, and  has even mastered  the accent!

John Brosnan as George Harrison did an amazing job playing the Eric Clapton guitar solo on While My Guitar Gently Weeps, and makes a credible George, though his spoken accent is not scouse!

Which brings us to Ringo, played by Ben Cullingworth.  Drummers don’t get much of limelight, but he managed to nail It Don’t Come Easy.

The harmonies when singing as a group are great and well defined. Solo spots are also good, supported by the other band members and Michael Bramwell (Musical Director and Musical Supervisor) on keyboards.  Of special note is Angeletti’s Blackbird, simple and evocative, and Gagliano’s Imagine, which must be one of the best songs ever written.

The band has a great pounding sound and the songs, well known in this city, carry the audience along.  The mood lighting adds to the atmosphere and even the audience are depicted on the tv screens clapping and singing along – so if you go you better wear your best threads!

The only quibble is with the accents. Angeletti and Gagliano have it sorted. But with Brosnan and Cullingworth, when they spoke, which was not often, it jarred.

Should this matter when the music is so good? Well in this city, I think it does. Maybe it’s hypercritical but we are being sold a dream here, a dream of a band back together, a band we all love and hold dear to our hearts.

But having said that, Let if Be is a great night out, a night to reminisce and enjoy all over again a band that conquered the world.