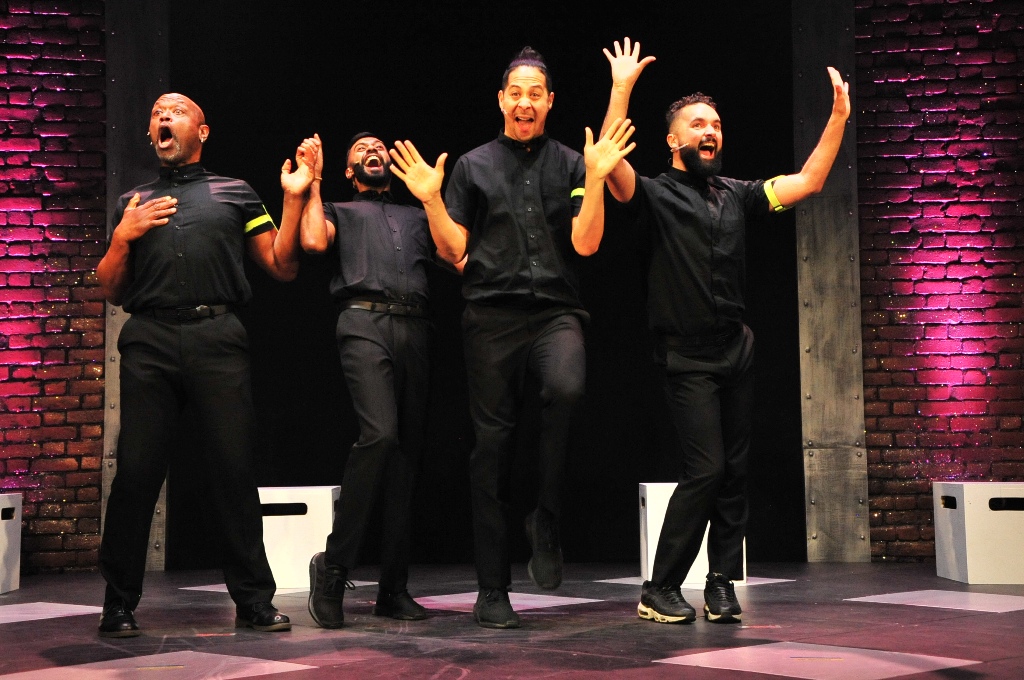 After a hugely successful smash run in the Studio Downstairs, Liverpool based theatre company Boisterous are taking the Royal Court’s main stage in a revamped production of Bouncers. A wild and thoughtful insight into ‘the city at night’ where four bouncers take us on a journey through the recognisable highs and lows of todays nightlife.

The scene is set immediately with a Live DJ (DJ Spykatcha) taking the stage and the bouncers surveying the audience pre-show, the action begins as they run on the stage and completely transform into an array of varying personalities. Nearing the end of the first half we get to see Judd (Mutty Burman), Les (Michael Horsley), Ralph (Zain Salim) and, the one and only Lucky Eric (Joe Speare), known as – The Bouncers.

Prior to this, the four men adapt several distinctive roles of two separate groups of friends – 4 rowdy lads ready to pull and 4 glammed up scouse birds. The transition of movement and timing between each character is impeccable, all four manage to alter EVERYTHING: their faces, voices, bodies to completely embody their characters all with in an abrupt second. It is impossible to pick out a special mention as they are all flawless! – However, Salim’s scouse girl dancing and overall body movement may just take the cake.

A huge round of applause to Designer (Richard Foxton), Lighting Designer (Ian Scott), and Sound Designer (Kate Harvey) who manage to create an entire array of settings using only four simple boxes and a DJ to create a countless number of memorable scenes. Immersing us into a barber shop, a taxi, a nightclub and a kebab shop… making us believe that we are actually there.

Underneath all the laughs, Lucky Eric acts as the voice of reason providing 3 speeches which address the harmful nature of nightclub culture, all gaining a well-deserved ovation and leaves us a moment to think about the consequences of a typical night on the town.

If you’re looking to reminisce over your piss-up days, ponder over the social commentaries or just have a laugh and some fun then I 100% recommend bouncers as a comedic and lively show, balancing with an important and thoughtful message.

Bouncers is at the Royal Court until September 15.