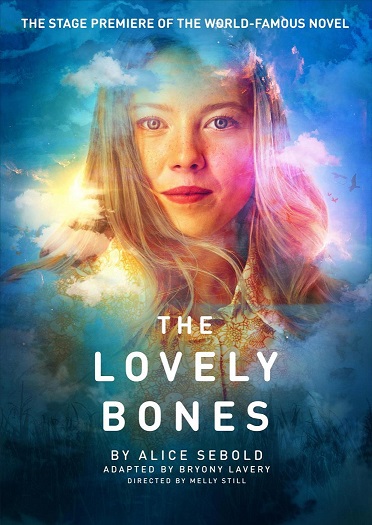 Alice Sebold’s globally best-selling novel The Lovely Bones is adapted to stage by Bryony Lavery in a poignant and intimate performance at The Everyman Theatre in Liverpool. Following the story of Susie Salmon (Like the fish) and her journey of life, through death.

Sebold’s original text is kept close to home in Lavery’s adaptation, jumping in straight away with 14-year-old Susie’s (Charlotte Beamount) vicious rape and murder. Then going on to pursue Susie’s new reality ‘in-between’ heaven and earth, observing her family grieve and come to terms with her death in a claustrophobic square of chalk illustrating Susie’s confinement.

Although the novel may seem difficult to put to stage with Susie’s heaven narrative, Melly Still’s, Ana Inés Jabares-Pita’s and Matt Haskins’ astounding production, design and lighting cleverly bring the story to life in the 1970’s. Using a tilted mirror that gives the audience a dual perspective, with the scenes below projected above and the mirror used as a window into character moments.

Crucial elements of narrative are inventively presented with Susie’s rape and murder witnessed through a dispersal of clothes, a soundtrack of screams and Susie narrating her struggle, managing to create a penetrating scene without causing any discomfort or visual trauma. 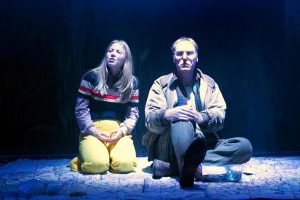 Even the emotional meeting of the past killer’s victims is delicately and skilfully shown with the fellow actors using their arms as puppets with the victim’s dresses.

Beamount perfectly embodies the character of Susie Salmon exploring her female sexuality and raw, screaming passion whilst never leaving the stage. It is hard to take your eyes off her with her captivating movement, abrupt scene changes from flashbacks into her personal heaven. Beamount is seriously impressive.

Whilst the majority of the cast take on several character roles, Karan Gill impressively takes on three including Holiday the family dog. Gill’s role as Holiday is quirky and light-hearted, adding a touch of needed playfulness to the intense plot. Susan Bovell also does this in all three of her roles, adding dark satire.

Keith Dunphy’s portrayal of serial killer Mr Harvey is eerily spine chilling as he moves slowly around calculating around the intimate set dragging parts of Susie’s body in a blooded bag.

The cast and crew have reformed a memorable coming of age story with an important message of family dynamics and dealing with grief in an innovative 100-minute spectacle. This heart-wrenching story is sure to tug at heartstrings following its tour throughout the UK.

The Lovely Bones is at The Everyman Theatre, Liverpool until October 6.