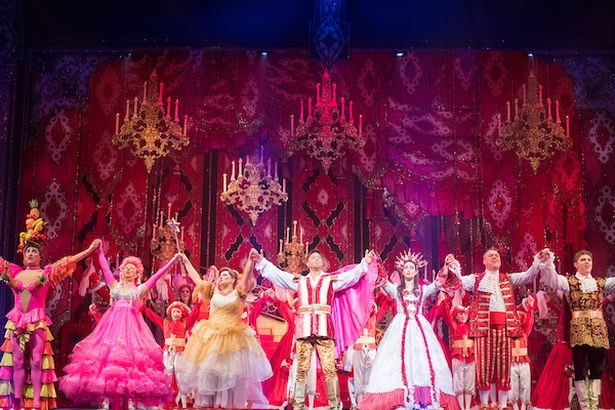 If you like your panto with mucho spectacle, Cinderella at Liverpool’s Empire is the one for you. Yes, it’s got lovely Jodie Prenger as the beltingly-voiced Fairy Godmother. Yes, it’s got hunksome Duncan, erstwhile of Blue and latterly of Hollyoaks, as Prince Charming. And, yes, it’s got a fresh-faced beauty in Olivia Sloyan as Cinders.

But it’s also got the best special effects in town. (Oh no it hasn’t! Oh yes it really has!) I kid you not, Cinders’ pumpkin carriage is pulled literally aloft by a veritable Pegasus. For one brief and insane nano-second, I actually thought they had hoisted a real horse above the stage for this scene. The Fairy Godmother arrives amid a shower of amber embers and Cinderella’s niftily stitched gown swirls from rags to swags before your very eyes as she twirls.

The set is pretty gorgeous too. From the opening scene, cottages nestled in snowy deeps straight out of hibernal Bavaria, where the cast somewhat incongruously sing By The Mersey, to the Baroque splendour of the royal palace, no penny has been scrimped.

And virgin pantomime dames, James Templeton and Daniel Taylor as Ugly Sisters Verruca and Hernia, complete with pooches Theresa May and Stormsy, pull off their performances with aplomb, splendidly upholstered in neon and accessorised with candelabra.

John Evans, as Buttons, is probably the hardest working member of the cast, combining comic acting with stand-up, whilst roundly but amusingly abusing the audience, simultaneously coaxing and sneering at our participation, yet still gentle enough to conduct the orchestra of voluntary tots in a round of I Am The Music Man.

Possibly the most sustainedly skilful set has the Ugly Sisters, Buttons and the Fairy Godmother in a fabulous piece of slapstick choreography where poor old Buttons gets coshed and goosed repeatedly whilst the others smoothly dodge blows like a great, human-limbed, articulated piece of Heath Robinson machinery.

If you haven’t booked your Chrimbo panto yet, go to Cinderella at The Liverpool Empire Theatre – you’ll have a ball!

Cinderella is at The Liverpool Empire until January 7. For Tickets Click HERE