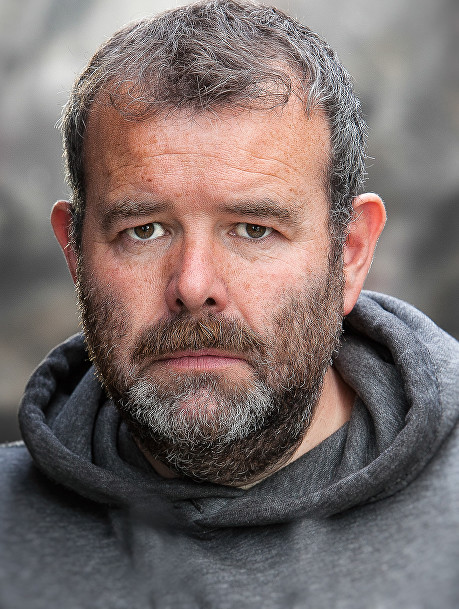 Birdsong comes to New Brighton’s Floral Pavilion from March 6th to March 10th, 2018, in a touring production that conicides with the commemorating of the 100th anniversary of the end of the First World War.

The critically acclaimed stage show, based on the best selling Sebastian Faulks novel, will be visiting Wirral on its final touring production and tells a mesmerising story of love and courage set both before and during the Great War.

Simon Lloyd will be playing Arthur Shaw in this production which has been adapted by Rachel Wagstaff and directed by Alistair Whatley. “I’m looking forward to coming back to New Brighton,” Simon said. “I was up there a few years ago doing Horrible Histories and we had a great time up there, so it’ll be nice performing in something quite a bit different, although still history based, with Birdsong.” 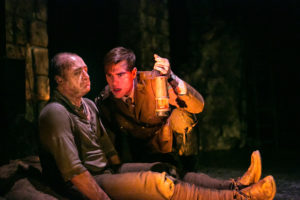 “My character, Arthur, is a Yorkshireman; Sheffield born-and-bred. He’s a mid-to-late forties family man with a couple of kids, who used to be a collier and, because of that, was signed up to undertake the tunnelling between the lines of The Western Front. It must have been a huge culture shock for the likes of many like Arthur, who’d never been out of their home city or town before, to end up in the terrifying mayhem that was The Somme.”

In a period of history where Class was everything, Birdsong challenges the perception of war and also those social barriers faced by the troops. “It’s a story that transcends class in a lot of ways. There was a very clear line between officers and the men, as I guess there are today, but Birdsong breaks through these in a very interesting way. In the end, to coin a popular phrase of today, everybody really is all in it together, which is something Sebastian has managed to get across in the novel very, very well indeed.”

“I didn’t read the book when it first came out, although I am a history buff myself, because I didn’t believe anyone who hadn’t experienced the events themselves could do them full justice. It was only when I was offered the part that I read the book and was absolutely blown away by the beauty of his prose and the manner in which he gets this really heart-wrenching story across.” 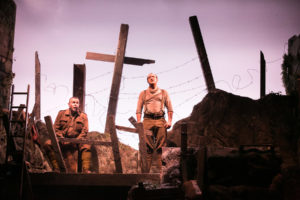 performed. “I was actually involved with the play in the 2014 production too. It wasn’t on tour in 2016 and so missed coinciding with the centennial of The Somme itself, so to be out with it this year makes it extra poignant. I think the Great War has sort of embedded itself in our consciousness now, so that barely a week goes by without there being an anniversary of something that happened. Which to my mind is a good thing, because what those guys went through should never be forgotten.”

“To be on tour in the year that commemorates the Armistice, though, is wonderful and particularly as this will be the last tour. It’s also nice when you speak to people who’s family – either grandfathers or, in some cases, fathers – were directly involved and see how well they respond to what’s been portrayed.”

“It’s also good to see a lot of school children in, because The Great War is covered in the school syllabuses in detail. I’m not sure if the novel still is, but it certainly was back in 2014. Unlike in Germany, both wars are so much in our national psyche with Remembrance Sunday and so on, kids are very attuned to the events of a hundred years ago. We did a few talks in town hall’s in 2014 and it was good see just how interested they are in what took place in Belgium and France. Not only interested, either, but also very informed. Thankfully, both wars – how they started and their consequences – are seemingly being taught in the right manner.” 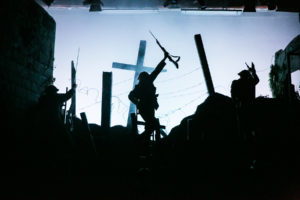 Other than the story itself, what will resonate with audiences is the epic scale of the play. The set is vast and almost becomes an extra character in proceedings.

“It’s amazing what Victoria Spearing has created and how Alistair Whatley, and Charlotte Peters who co-directed, use it to the maximum,” Simon said. “Everything is done with a great deal of subtlety, particularly when depicting the claustrophobic intimacy of the tunnels themselves. The combination of the trenches, the tunnels and the raised areas gives the whole play a very different dynamic and I would say its the most technical touring set I’ve ever worked with, because of all of its different elements.”

“The lights and the effects, too, all really conjure up an atmosphere unique to the time, I think, and is a very important part of the whole experience so that the play still packs a punch. Its amazing how it all fits into one articulated trailer, to be honest, and there are moments in it that will definitely have hairs standing to attention on the backs of necks. It’s a huge piece of theatre in all respects.”

It’s not unheard of for the author to come to a show either. “He does come in, yes, despite the fact he’s seen it many times before. He’s even been known to take on a little cameo role, maybe in the opening barroom scene or something like that. He’s very up for dressing in First World War army fatigues.”

This is also a very long, very demanding tour. “We have a couple of well placed breaks 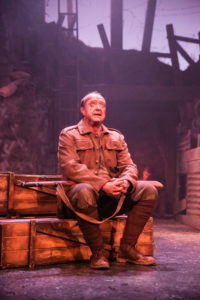 this time around, which is nice. It was a pretty full on three week rehearsal process as well because of the physicality of the play. Some of us have been in the play before, whereas others are completely new to it, so that level of intense preparation is paying dividends right now and its going to be an exciting six months or so.”

“It’s a very emotional journey, following two men through from 1910 up until 1918. Amidst the turmoil, there are a few chuckles thrown in and it is sort of an encapsulation of life at that time.“

Birdsong will be at The New Brighton Floral Pavilion March 6 – March 10.