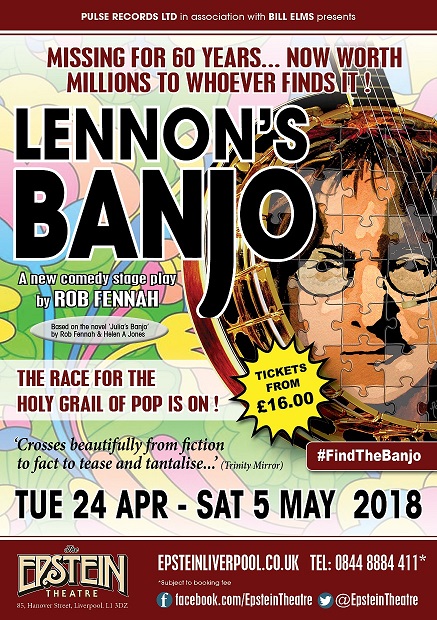 The countdown is on to the world premiere of Lennon’s Banjo in Liverpool in less than 10 weeks’ time. Lennon’s Banjo is a new comedy stage play, which opens at Liverpool’s Epstein Theatre on Tuesday 24 April – and features original Beatle drummer Pete Best, a huge coup for the show!

The two-week run continues until Saturday 5 May. Pete Best will appear as himself in three special performances. Lennon’s Banjo is a cross between fact and fiction, based on the 2012 novel Julia’s Banjo.

The quest is on to find the holy grail of music memorabilia – the missing banjo on which John Lennon was taught to play music by his mother Julia Lennon, who first introduced the youngster to rock and roll. The banjo belonged to John’s mother Julia, but it went missing shortly after she was killed in a tragic road accident. The banjo’s whereabouts have remained a mystery ever since. That was 60 years ago.

Coronation Street and Doctor Who’s Eric Potts will play tour guide and Beatle nerd Barry. Barry lives for just one thing, The Beatles. His love for the Fab Four is all consuming and probably the main reason he has never had a girlfriend. Oblivious to ridicule by his workmate, Sid, and so-called friends, Joe and Steve, he has only one true admirer, Brenda.

Star of Coronation Street and Emmerdale, Mark Moraghan joins the cast to play the part of ‘Beatles Shop’ co-owner Joe. Joe is the older brother of Steve. Both ex dock-workers, Joe harbours a nagging sense of guilt for persuading Steve to go into partnership with him and buy The Beatles Shop. After 20 years in the shop, all his hopes and dreams of a better life have long since evaporated.

Liverpool’s own Jake Abraham takes on the role of disgruntled ‘Beatles Shop’ co-owner Steve who, along with his brother Joe, has grown tired of his business tenure. Steve resents working in The Beatles Shop and misses the camaraderie of his old workmates. He feels his life is wasting away and craves for a more glamorous existence. Opening a bar in Tenerife is his ultimate goal.

Lynn Francis will play work-weary pub landlady Brenda. Brenda has clearly been through the mill. But underneath her dull appearance there still remains an attractive woman crying out for love. Unimpressed by loud-mouthed admirers like Sid, Brenda has her eyes set on a much gentler soul…Barry.

Danny O’Brien will be appearing in the role of Travis. Texan native Travis is not afraid to risk everything if it means making a fast buck.  But underneath the bullish bravado lurks a gentler character. Despite causing his wife no end of grief with all the wheeling and dealing, he desperately wants to be a winner and make her proud.

Stephanie Dooley has also joined the cast to play the part of Texan, Cheryl. Stephanie is best known for her roles in Emmerdale and Casualty.  Long-suffering Cheryl does her best to stand by her husband Travis. She is the common sense in the marriage and tries to reign Travis in whenever she feels he’s getting over-ambitious. She rarely succeeds.

Appearing in the role of Sid is Alan Stocks. A throwback to 50’s teddy-boy era, Sid fancies himself as a ladies’ man but in reality women wouldn’t touch him with a bargepole. Always on Barry’s case, Sid sees the tour guide as an easy target and enjoys winding him up at every opportunity.

Roy Carruthers will play ruthless Texan businessman Tony DeVito. Tony DeVito oozes the confidence of a successful businessman. Never seen without a cigar hanging from his mouth, he is used to getting what he wants. DeVito’s bravado is propped up by his hired muscle, Carl and Wayne.

Ex-Beatle Pete Best will appear as himself in three performances. Alan Stocks will portray Pete Best in all other performances during the two-week run. Pete was The Beatles’ drummer between 1960 and 1962, playing more than 1,000 live performances including nightclubs and dance halls in both Liverpool and Hamburg. He recorded 27 songs as a Beatle, and he also played The Beatles’ very first show in Liverpool at the Casbah Coffee Club. Pete will appear in the 2.30pm and 7.30pm shows on Wednesday 25 April, and the 7.30pm show on Saturday 5 May.