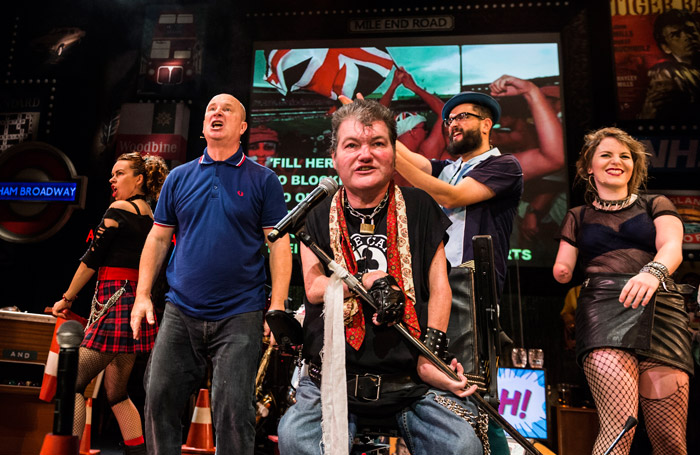 Busy, busy, busy. There is so much going on during Paul Sirett and Graeae‘s Reasons to be Cheerful it’s pretty exhausting to watch. Satisfying, richly entertaining and evocative, yes, but exhausting nonetheless. With subtitles, sign language, deliberately distorted microphone feedback and raucous punk rock vibes supplied by the exquisite John Kelly – as well as a multi-layered story – there’s a lot to keep a grip of in a little over two hours.

Still, it is more than worth the effort, as you would expect from any Graeae production.

Vinny and Colin are desperate to see their heroes Ian Dury and The Blockheads play The Hammersmith Odeon, although for different reasons: Colin because he’s a Blockheads Mastermind, Vinny because he wants to take his terminally ill dad, Bobby, on one last shindig while he can. Then there’s Janine, who Vinnie fancies more than his confidence will allow for, and Dave who’s, well, tricky.

The scene is set within the confines of The Red Lion with its ubiquitous “man who can sort you out”, in this case Pickles, and a stockroom of the local supermarket … ah, Fine Fare! Now there’s a blast from the past.

And it’s not the only one either.

The majesty of – and surprise, in truth – Dury’s lyricism is that it’s wit, angst, razor sharp rallying cries and overall joy has lost none of their cut or relevance, begging the realisation that overall not much has changed across the intervening years. The Tories are still in power, even, and under a woman at that!

That Dury’s poetry is plastered across a huge stage downstage for us, the audience, to enjoy in full only serves to bring home all the stronger his points and singalong-a-Blockhead becomes de rigour for the evening in the process, which is no bad thing let’s be fair.

Back in the day when Bacardi and Coke was almost a cocktail and food in pubs equated to Ready Salted crisps or, maybe, the odd pickled egg, the atmosphere of the day is beautifully captured by Liz Ascroft’s full-to-busting set design, as is the soundtrack itself which is hammered out magnificently by the live band headed by write Paul Sirett himself.

Oh and it’s pretty clear from the pithy, insightful true-to-the-spirit-of-it’s-inspiration script that Paul Sirett knows how to write and write well at that.

But it’s the cast which truly brings the spark to a roaring inferno, not least of which being Beth Hinton-Lever as the feisty bundle of energy that is Janine and the oily obsequiousness Max Runham injects into Dave. Brilliant too as Vinnie and Colin respectively are the two Stephens, Lloyd and, ahem, Collins. Their zip and zest are almost tangible and so well do these two bounce off each other, it’s easy to see their bond stretches further than the stage at the end of a long tour.

This is the beauty of Graeae productions. It’s a team built around more than teamwork but instead is constructed upon mutual respect, understanding, acceptance and, above all, a recognition of ability rather than disability that is as admirable as it is dynamic and refreshing.

Reasons to be Cheerful indeed and, as a result, this is a musical drama guaranteed to have you belting out Blockheads hits you’d possibly forgotten even existed, with even more gusto.