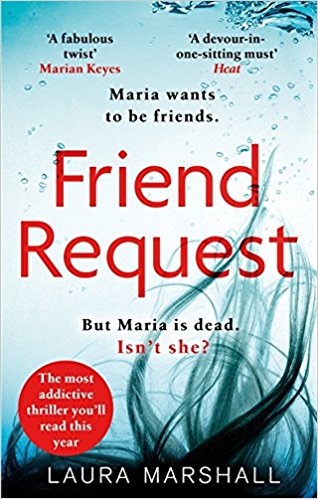 Friend Request is Laura Marshall’s debut novel, and taps into the world of social media, revealing just how much of our lives we are willing to share with complete strangers.

When Louise Williams receives a message from someone left long in the past, her heart nearly stops. Maria Weston wants to be friends on Facebook. Maria Weston has been missing for over twenty-five years. She was last seen the night of a school leavers’ party, and the world believes her to be dead. Particularly Louise, who has lived her adult life with a terrible secret.

As Maria’s messages start to escalate, Louise forces herself to reconnect with the old friends she once tried so hard to impress. Trying to piece together exactly what that happened that night, she soon discovers there’s much she didn’t know. The only certainty is that Maria Weston disappeared that night, never to be heard of again – until now.

Told from Louise’s perspective the story jumps back to 1989 as Louise is remembering the events leading up to when Maria disappeared returning back to the present day. Marshall does not rush the story so there is a gradual build up of tension as the pace quickens and Louise discovers more about the identity of who is really sending her the Facebook messages.

It is very easy to be pulled into Louise’s world and her relationship with her four-year son, Henry is written beautifully. Her descriptions of 80s secondary school and the complex friendships that only teenagers have, are written well and the consequences of what Louise did to Maria at that leaving party is revealed dramatically. There are lots of twists and turns and as we only see the action from Louise’s point of view, the realization of who really was behind Maria’s disappearance is a moving end to the story.