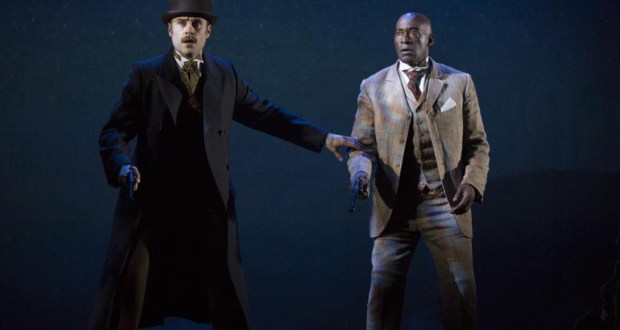 Oh what fun it is to ride on a one hounded open sleigh. The Liverpool Playhouse have turned out a cracking non-festive/festive treat with Baskerville, a comic retake on the classic Sherlock Holmes story.

There’s lots to be said for minimalist. Yet it doesn’t really get much more minimalist than five actors taking on 37 parts and all with equal dexterity. There are bangs, flashes, wallops thanks to Simin Daws mouthwateringly adept staging. There are ghostly goings on, villains aplenty and heroes at every turn. There is smoke. There are mirrors. There is everything a good murder mystery needs … and more than a few laughs thrown into the mix as well. There are special effects too. Not for nothing is Sir Henry dresses in a stylish white overcoat. Keep your eyes peeled!

Heading up the cast is Jay Taylor’s youthful-yet-accomplished Holmes. Here’s a guy who is clearly enjoying himself, trying desperately hard at times not to giggle aloud as he is pranked by cast and crew alike. The result is that far from being the fastidious stuffed shirt we know and love, Holmes is more relaxed – more fun – than usual, which rubs off on those around him.

As Watson, it is good to see Patrick Robinson in a lighter-toned role than those we’re used to. Known for playing Ash in Casualty for a number of years, Robinson has had some heady roles including Red in Shawshank Redemption on tour and nor forgetting his magnificent part in Rough Crossings here in Liverpool in 2008. As Watson though he’s clearly having a ball, playing up to Taylor’s Holmes and, more often, Edward Harrison’s superb Sir Henry, Robinson is extremely funny and the ideal foil.

Ryan Pope gets a little sweaty as Stapleton et al. Hardly surprising really. He’s barely off stage and when it comes o the ‘big reveal’, his control against cracking up is exemplary. His rubber-faced mannerisms, too, are to die for and add extra merriment to the mayhem.

Bessie Taylor, meanwhile, often threatens to steal the show completely. This is especially true for the mispronouncing Mrs Barrymore who is quite hilarious, with further contributions along the way that never disappoint.

Life on Dartmoor is a bleak existence at times. A pity then that Baskerville is merely make-believe:  a few more nights of fun and frolics amongst the stone caves like this would surely banish the blues from the cold winter nights anywhere and not least certainly at The Liverpool Playhouse Theatre over Christmas.