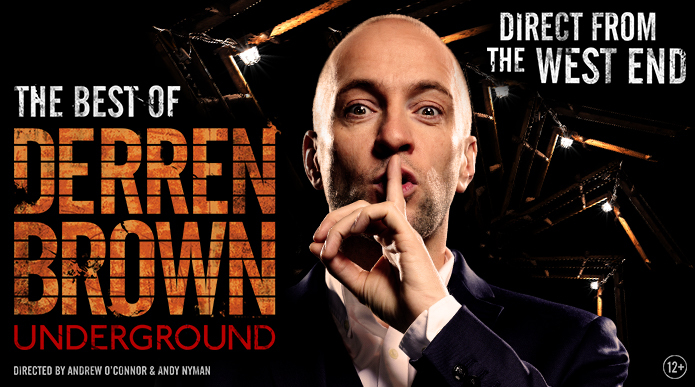 It’s hard to review Derren Brown: Underground. Giving something, anything, away is tantamount to treason; a sin worse than, well, being told who the killer is halfway through Broadchurch. Suffice to say though that if you have tickets, it’s money well spent. This despite the knowledge that in various guises, it’s been done before. By Derren Brown, himself.

It helps too that this time around in Liverpool he’s at The Royal Court Theatre. Somehow the intimate, Art Deco surroundings of the packed auditorium coupled with the velveteen drapery of the stage set, adds to the vaudevillian masterclass taking place, so we’re easier seduced by Brown’s dazzling repartee, deft sleight-of-hand and his skills in suspending belief.

For cynics, this is smoke and mirrors of the highest order. Fair shout, too. Brown himself goes to great lengths to explain he isn’t a faith healer or a psychic or any other form of Bunko Booth Bar Teller, intent on instilling beliefs into the faithless. For those who want entertainment, however, Derren Brown’s theatrics are second-to-none.

His use of language guides and misguides the eye; uses and abuses the senses; fixes and loosens our perception of self. In short, if there’s ever been a more controlled miscontroller then please step forward. No Dynamo, Daniels, Copperfield or Nixon this. Derren Brown stands front and centre as the epitome of misdirection, fun and total OMG moments around.

Flinging frisbees, recognising faces, working out thoughts via twitching, animal magic and listening to voices from beyond pose nothing but minor barriers to be vanquished, with Brown cheekily bedecked in old school tails like some sort of Astaire who’s danced off with all the prizes on Strictly. Which, obviously, he does with style and all in a jam packed first half! Rest assured, there’s even more to come after the interval!

Underground may be a “Greatest Hits” collective, sure. However, there is undoubtedly a lot more in the cupboard for the maestro of magic that is Derren Brown. Just watch this, er, space!

Derren Brown: Underground is at The Liverpool Royal Court until April 7