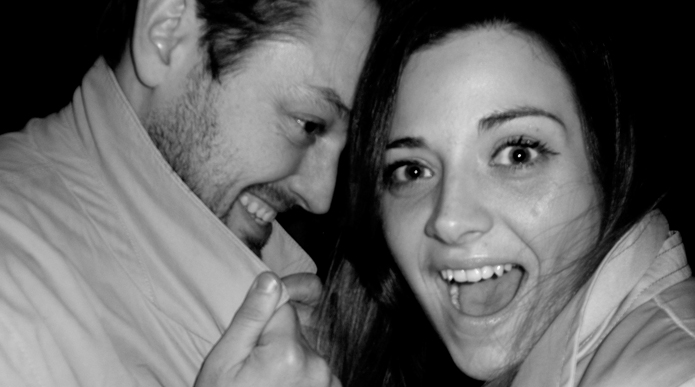 Friendship. Sometimes it develops over time, sometimes it sneaks up and cuffs you around the head. Sometimes it’s just kind of there and in Joanne Sherryden’s prize winning comedy The Rainbow Connection, which is currently running Downstairs at The Liverpool Royal Court, it is a forced thing that grows over a few short weeks and flowers into something quite unexpected.

The lovely new space of this latest Liverpool performance venue is ideally suited for plays such as this. The close proximity of the audience to the stage, the use of subtle lighting and the crystalline acoustics all combine in enhancing the experience no end. Throw in the opportunity for a more than decent meal and a few drinks beforehand and the stage is literally set for a cracking night out.

Of course the mandatory requirement is that play is actually good and, with this piece which was first staged at The Unity back in 2013, there is no fear of it being anything but good. Yes, the scenario may seem a bit formulaic on the face of it, but there are more than enough twists and turns to keep predictability at bay, thanks to more than a few laugh out loud funny moments coupled with a healthy smattering of OMG surprises.

Angela Simms as the dippy, scatty Shelly gives a wonderful performance at every turn. Her nuanced mannerisms, fabulous vocal delivery and all round stage presence here all underline the massive steps she has taken to become the really fine actress she is, both upstairs in the likes of The Royal – which she co-wrote – and here in this often delightful two hander. Shelly’s ditzy views could easily veer down the pathway named Stereotype. In Simms’ more than capable hands, however, she becomes nothing more than eminently huggable in a sister/brother cared for way.

Danny O’Brien, who too was in The Royal during both runs, delivers the goods once again in the altogether different role of agoraphobic, reclusive gay Joe. A man with more secrets than MI5, but with such a fragile inner self it’s as though he’s about to crack from side-to-side under the sheer pressures of life. It’s a pleasure to watch the man blossom from within the shadows of himself whilst also revelling in the character’s awkward shyness.

In getting such bold sentiments across, O’Brien is superb. His focus and energy being outmatched only by the out-and-out tenderness he manages to incorporate so that, by the end, we have been both with and against Joe, understood and misunderstood his intentions and are ultimately confronted by a real life in microcosm.

The pace is fast, the dialogue is snappy so the action flows almost faultlessly, which is no small feat in a play set entirely in double sofa’d lounge. As a result The Rainbow Connection remains a pleasure to watch and is just the remedy for any midweek blues it’s audiences might have.

The Rainbow Connection runs Monday to Thursday evening until April 13