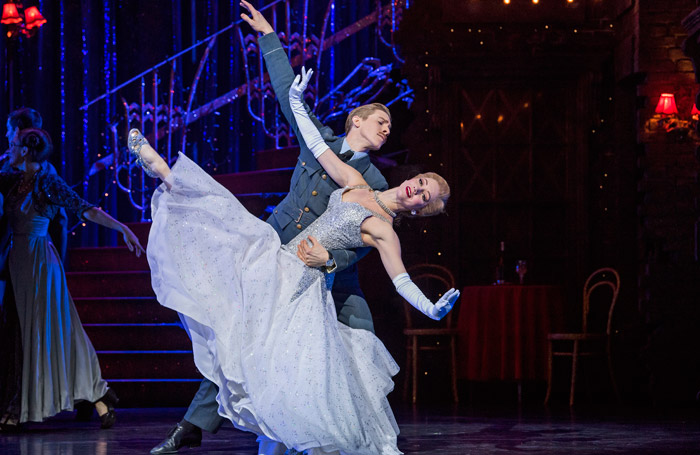 Matthew Bourne’s Cinderella
Liverpool Empire Theatre
Until April 14 2018
Director and Choreographer: Matthew Bourne
Music: Prokofiev
Conductor: Brett Morris
Set and Costume Design: Lez Brotherston
Lighting Designer: Neil Austin
Sound Design: Paul Groothius
RATING: *****
REVIEWER: JEANETTE SMITH
How can greys and blacks be so colourful? When it’s Matthew Bourne’s Cinderella, set in World War II, currently showing at the Liverpool Empire. And it’s an exceptional class act, one not to be missed!
Bourne wrote the piece in 1997 but this new 2017 touring production has upped the drama and devastation of wartime, and throws in the live-for-today attitude of the time.
The ballet – or dance theatre as Bourne prefers to call it – is a fantastical re-imagining of the Cinderella story  drawing deeply from 1940s with its star-studied  movies, bringing a great deal of glitz to the blitz.
We see the dowdy Cinders (the petite and endearing Ashley Straw) in her home surrounded by step-brothers and sisters who taunt her and expect her to act the skivvy. Her wheel-chair bound father (Alan Vincent), whom we later learn was shot by the stepmother, has difficulty showing affection. Into this melee arrives injured airman Harry, the Pilot (the brilliant Dominic North).  Straw’s and North’s dancing is enchanting and expressive.
The costumes of the family are typical 1940s, with the youngest boy in short pants, Argyle knee socks and schoolboy cap, with the two stepsisters (on no account ‘ugly’, except in manner) dressed in typical boxy designs, and glamourous hairdos.  Cinders, by contrast wears a drab grey cardigan and pleated skirt, her hair scraped back.
The dancing is energetic and imaginative with the usual Bourne quirks, that amaze and satisfy. Prokofiev’s dramatic music fits well with the war-time ambience. In fact he wrote it during World War II which could, Bourne surmises, reflect the drama of the period.
The inevitable invitations arrive with stepmother Sybil (the classy but alcoholic Madelaine Brennan) leading the family in a dance lesson – eschewing any tempts to jitterbug by the younger members and their partners, all in military uniform. This is but one of the comedic touches by Bourne that are peppered right through the whole ballet, and some, one might say, are a little risqué. Brennan is a delight in her malevolence, her dancing articulate and demonstrative.
The family, after ejecting Harry, the injured pilot to whom Cinders has become attached, attend the ball at the renowned Cafe de Paris that was fatefully bombed in March 1941. Sad Cinders, about to leave home for good, suitcase in hand, is whisked there in a dream by an Angel (the wonderful Liam Mower) on a motorbike and sidecar instead of the traditional carriage.
It is in the Cafe de Paris scene that Lez Brotherson’s astonishing design astounds – with bombs falling, sets cleverly disintegrating before our eyes, the walls collapsing and the ceiling descending in chunks.  The wailing of sirens and flashing lights accompanies the dramatic score that washes around the audience in surround sound, the first time Bourne has employed this technique. It’s tremendously evocative and takes you back to the death and destruction of the time.
We see the dancers flailing and crumpled (100 revellers were killed or maimed on that night). Into this mayhem the Angel appears and resurrects the scene and the dancers. Cinders arrives in a beautiful white bejewelled gown and glitter shoes (a dream sequence) and receives the attention of all, eventually meeting again the pilot she has fallen in love with. The narrative continues with the couple periodically missing each other during the chaos of the blitz but the story ends happily – with silver glitter shoes re-matched.
What impresses in this production is the sheer verve of the dancing, the innovation and the dramatic sets. The choreography is fresh and idiosyncratic that suprises and pleases and the costumes of the period a delight.
The acting is magnificent, especially in the London Underground and Thames Embankment scenes with spivs and prostitutes invoking a menacing tone that highlight the fears of the period.Of course Prokovofiev’s music is a gift to such drama, but Bourne squeezes every ounce of dramatic heft from the notes.
The Paddington Station scene, complete with tea room, is reminiscent of Brief Encounter with uniformed men saying farewell to their sweethearts with an actual ‘train’ chuffing into the station. Here we see the ‘just married’ Cinders and Harry departing for a life together.
The final scene is a delight – a celebration of VE day with bunting, confetti and joyous dancing as each cast member takes a bow.
Matthew Bourne’s Cinderella runs until April 14.
Like This Review? Like Our Facebook Page Chris High Reviews: Theatre