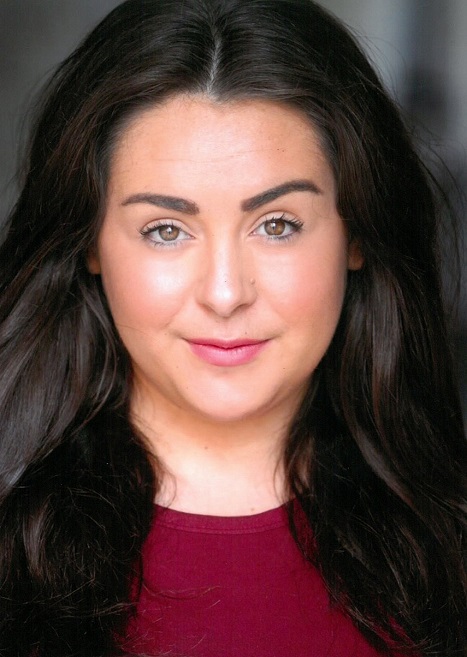 “When I was at Hoylake School of Dance, The Empire was always the aim: to be acting professionally on that stage where so many legends have performed. Now it’s about to happen I’m, like, ‘pinch me’ and my mum is coming four nights on the spin. Any minute now, we’re both going to wake up!”

From The Hoylake School of Dance to the bright lights of The Liverpool Empire stage in one of the leading roles in amongst the most adored musicals of recent years. This has been story so far for Meols raised actor Rebecca Mendoza who is about to star as Tracy Turnblad in the smash hit musical Hairspray at the iconic venue. As professional debuts go, it’s a pretty big deal!

“What’s really strange in a funny way is that, eight years ago, I was watching the show starring Michael Starke and Les Dennis at The Empire. I sat in the theatre with my sister and my friends then wrote on Facebook: ‘I’m sat watching Hairspray and really hope to be a part of this one day’. Eight years later … to the day … I was opening as Tracy in Cardiff! How crazy is that!”

Rebecca is quick to acknowledge the work of The Hoylake School of Dance and their encouragement to fulfil the dreams of a young girl starting out. “I’ve been there since I was four years old and actually taught at the school for two years before going to college. At the age of thirteen, the thing in theatre was that you had to be tall, blonde, leggy and of a certain size to make it. I’ve always been curvy and The Hoylake School of Dance never wavered in their inspiration and motivation. Their belief is that as long as someone is of a standard, no matter what, they can go on and achieve whatever they want.”

“Hoylake School of Dance have been a big part of what’s happened. When I started to apply to colleges, many said no because of my size. Great talent, yes. Wrong size or shape though. Sorry. Hoylake never, ever gave up on me and even provided private dance lessons and showed me the right songs to sing at auditions so as to get my technique as right as possible. Two years later, i was accepted into Italia Conti and a lot of it is a result of the school’s belief in me. I am just so grateful for everything they’ve done.”

“It’s crazy and all a bit of a whirlwind, if I’m honest,” Rebecca laughed. “It was February and I was in my third year at The Italia Conti down in London. I hadn’t even done my showcase or anything when this all happened. It’s mad! She’s larger than life in just about every aspect – her personality, her size … everything – and she’s absolutely desperate to perform on her favourite TV show.”

“Tracy gets shot down for not being ‘the right look’, but is absolutely determined to succeed in her dream. She has the passion and desire to defy all the odds. On the way she meets a load of lovely friends who do nothing but help and encourage her, which is again comparable with my life. Tracy is absolutely my dream role, because I can’t think of any other character who is closer to the real me with regards to her looks and outlook.”

“The show is set in 1960s Baltimore, where black and white people can’t mix. Tracy, though, can’t understand this and so hijacks a live TV show and openly says that people are all the same, regardless of skin colour. To say it’s a roller coaster journey would be a bit of an understatement.”

“Another comparison between myself and Tracy is that, although her mum, Edna, has

been brought up in a time when she should be believe what Tracy is doing is wrong, she doesn’t. She is totally behind Tracy in everything she says and does – 100% encouraging – which is exactly how my mum is with me. Matt Rixon, who plays Edna, is absolutely lovely. From day one, we just hit it off and he is just hilarious. We have just the best time.”

As this is Rebecca’s debut, this is also her first taste being part of what is a pretty extensive and gruelling touring schedule. “It’s such a huge learning curve. There’re so many dates and a lot are quite short runs, so we’re changing venues on a weekly basis. Every Sunday is our day off which involves checking out, travelling to the next venue, getting yourself sorted in a new place then going again.”

“It’s been tough at times but this cast are just so strong and so supportive, it’s been an absolute pleasure so far. Everyone looks after each other. We were at one venue and mine and another cast member’s digs fell through. Straight away, the rest of the guys were phoning people they knew to sort us out. It was like one, properly big family swinging into action to look after their own.”

In the show, Tracy’s eye falls upon Link Larkin played in this production by Edward Chitticks. So amid all the going-and-frowning, there are obviously more than a few benefits. “Edward and me have clicked from day one and he is absolutely my best friend. He is just so funny to the extent where the chemistry our characters have on stage is pretty much genuine half the time. It helps, too, that he is just a beautiful man. Stunning. And I get to kiss him four times a night! How lucky am I!!??” 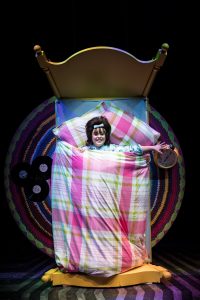 Also in the cast is Norman Pace, who is of such experience, Rebecca is quick to say how much she’s learned from the man playing Wilbur. “Although this is my first professional show, comedy is the thing I really love to do. Coming into my first proper job alongside a legend like Norman Pace is, well, just unbelievable. This is a man who is comedy gold. The big thing has been that, through rehearsals, he is so experienced that when we’ve come to particular lines or scenes, he’s suggested stuff that’s seen the laugh quota trebled. Having that kind of experience in your company, that eye for a laugh, is just incredible and I’ve learned so much from him already.”

The Liverpool Empire Theatre date is the third of tour. A homecoming appearance and then some. “It’s going to be one of those moments that I’m just never going to forget. I’ve appeared at The Empire before, but not like this. Not as a professional. I’ve already warned the cast I’m going to cry. I cannot wait. It’s such a huge theatre and it’s going to be half filled with my family. It’s going to be pretty amazing.”