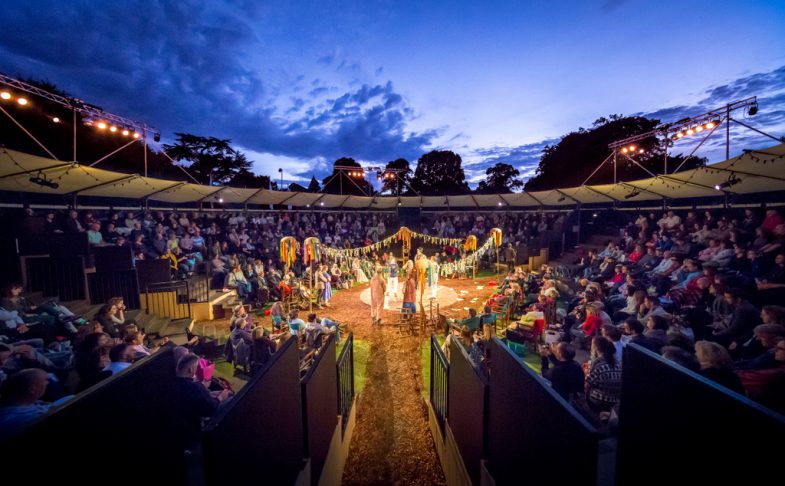 Much Ado About Nothing

Let me be clear: going to the Grosvenor Park open air theatre is one of my absolute, all-time favourite summer things to do; I’ve never seen a duff production here. And Bill Buckhurst’s production of Shakespeare’s Much Ado About Nothing didn’t let me down.

It’s a tale of contrasting love stories. For Hero and Claudio, it’s love at first sight; but old acquaintances Beatrice and Benedick can’t see what is under their noses and must be tricked into admitting their feelings. The love built on new foundations crumbles when villain Donna Joanna tries to prove that Hero is a wanton strumpet, whilst Beatrice and Benedick’s love is all the more strengthened by trying times. So, a lot of comedy and a brush with tragedy.

It’s tempting to assert that the actors have little to do but stick to the Bard’s hilarious banter and it’s a winner. But Emily Pithon and Alex Mugnaioni brought so much more to the party. Combined with a sure sense of timing were fabulously physical performances as Beatrice and Benedick. Parallel scenes see them sneaking in turn through the shrubbery to eavesdrop, unwitting dupes of a plot to throw them together. Pot plants are repositioned with careful choreography and Beatrice comes off the worse from an encounter with a watering can.

Mitesh Soni’s Claudio grew on me. I found him an unconvincing lover to begin with, although this may have been a deliberate interpretation of the callow youth, but he came into his own when things got nasty, giving an impassioned performance as the wronged groom.

I was, though, a bit baffled by the introduction of a female Don John, played by Lucy Keirl as Donna Joanna. I kept looking for the rationale: what point were they trying to make? Was it something to do with gender politics at the last gasp of the 16th Century? Was there some analogy with gender politics in the 21st Century? Well, yes, there was, sort of. But rather than there being any great message to be decoded, I concluded that, in this day and age, and in all fairness, a troupe of actors made up equally of men and women should share the plum roles equally. And Shakespeare wasn’t always great at proportionally representing women. Of course, in Shakey’s day, all the parts were played by men anyway.

So, Donna Joanna is not the only gender-shifted character. But she is probably the least successful. To be honest, I was a bit disappointed. Having seen Lucy Keirl in Swallows and Amazons, running concurrently at Grosvenor Park, I’d developed a bit of a girl-crush on her but I didn’t think Don Joanna gave her much to play with.

Don John the Bastard, as he’s known in the original, is the evil mastermind behind Hero’s downfall and the near-thwarting of our first couple’s happy-ever-after. The dastardly epithet “bastard” tells us all we need to know about his motivations: he’s the forgotten, disaffected, dispossessed brother of Don John, an archetypal malcontent. Having this character become a sour sister, strangely garbed in army fatigues, somehow doesn’t ring quite so true. I wonder if it’d been better for the fabulous Ms. Keirl to have played the character as a bloke, to have hammed up the brooding mischief-maker?

Of course, it can be easier to play for laughs but the third woman in what was written as a male role, Catherine Cusack as Leonato’s brother turned sister, Antonia, played it absolutely straight and the tongue-lashing she administers to the faithless, hapless Claudio works very well.

All in all, much ado about an awfully good evening at the theatre.