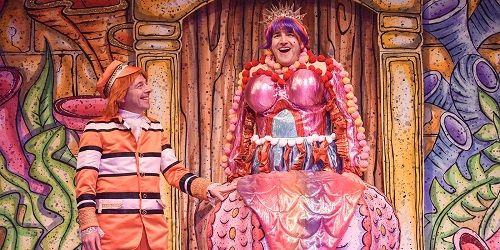 The Little Mermaid: Shrimply The Best

The Liverpool Everyman Rock ‘n’ Roll pantomime! That’s pretty much all that needs to be said, really, when it comes to all round, full on, side-splittingly brilliant family entertainment. This year it’s The Little Mermaid (sort of), and in all of these areas it ticks all the boxes and adds a few more besides.

The set is a cartoon / colouring book of immense proportions, only equalled by the glitz and sparkle of the delectable costumes. Franics Tucker’s Pearl is like an overblown shop window of pseudo glamour. His outfits are so garishly divine it’s a wonder the actor can move let alone do so with all the expected zip and zest. His traditional ‘lust’ for the poor male closest to being front and centre is as ever a joy, but it is Tucker’s disruptive extra-curricular asides that mischievously add to the carryings on.

As his side-kick, Nemo, Adam Keast is equally as energetic.  His delirious delectations are as delectable as they are desirous, with some of the innuendo swerving a little more towards the adult than usual – “it’s filthy this year, isn’t it!?” he declares happily – before steering it all back to safer ground expertly. Let’s be frank. It’ll be sad day when either or neither of these two ERnRP stalwarts aren’t involved. Both are the spine of the show and both deliver year-on-year, show-on-show and make it what it is; a fun fest of the highest water (sorry).

With a growing reputation for delivering of his own, Tom Connor’s Flounder is an absolute joy. His delivery and general ‘Tom’ foolery are brilliantly controlled, exquisitely eccentric and heart-warmingly endearing. And who’d have thought a Thatcher would be so well received in Liverpool! Okay, not that one, but Lucy Thatcher who as the spitefully, horrid Ivanna is a total pleasure to watch.

As the love interests, a welcome return to Stephanie Hockley who’s adorably dippy Marina is an absolute gem. All exaggerated mannerism and squeaky voiced naiveté, her character is as refreshing as an icicle on a baking hot day. Playing opposite is the ridiculously handsome Jamie Noar. All flashing teeth, pulsating biceps, slick moves and shape throwing skills to die for, his performance is enough to fill two pantos let alone this one alone.

Then there’s Danny Burns, who’s multi-character roles are each as individually brilliant as the next, with a sense of fun that’s simply glorious.

On top of all this, of course, is that when these guys aren’t acting they’re up in the corner belting out some mean riffs, licks and chords. Their talents shining like tin stars in a headlight, if they were to form a band of their own then the queue would be as long as the tentacle of the octopus that makes an appearance here.

The Everyman Theatre’s Rock ‘n’ Roll pantomime is an institution. A tradition as warmly anticipated as crackers, mistletoe and carols and is as grand, as warm and as super this year as ever.