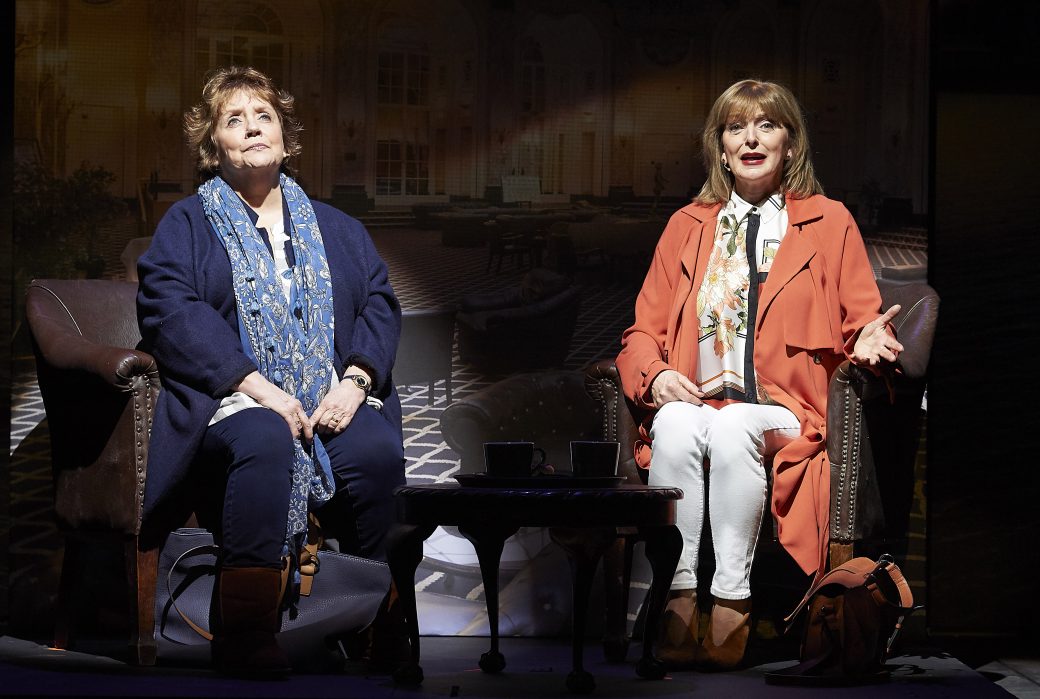 Taking audiences back to Huskisson Street, The Liver Birds reunites two scouse birds years later bringing back nostalgic memories of their old lives together in the Mighty Mersey whilst overcoming new struggles in a show that displays true Liverpudlian spirit and passion.

On a chance encounter after 40 years, Beryl and Sandra meet once again outside the their old flat on Huskisson Street which rushes back a ton of memories and some bad blood. Beryl played by Lesley Molony and Sandra played by Joanna Monro share a great onstage uneasy chemistry of two old friends who don’t know where they stand with each other.

Then enters Young Beryl (Lucinda Lawrence) and Young Sandra (Nicola Munns) taking the audience back in time to 1970’s Liverpool with mini flashback scenes. With both actors perfecting the accents and creating a true Liverpudlian 70’s feel, the audience is bound to feel nostalgic as old viewers of the famous TV show.

The live band played flawlessly throughout with the audience managing to get a glimpse of them in an old nightclub scene between young Beryl and young Sandra as they bounce around joyously dressed in 70’s fancy attire fitting completely well within the scene.

Mark, Lesley and Lucinda impressively manage to balance a variety of different roles magically transforming into a different character and outfit within a matter of seconds. Remarkably enough that they can even pass as different actors especially in scenes where Rice-Oxley, Lawrence and Munns manage to transform from 70’s scousers into modern day hairdressers at Andrew Collinge creating a comical musical number.

The second half ends with a captivating and emotional scene leaving audience on the edge of their seats with a shock discovery from Sandra. Both Molony and Monro emulate authentic emotions and a moving vocal performance finishing this half of the show with gasps from the audience.

The show delivers an array of various stage settings of different Liverpool hotspots through the smooth transitions of the mini sliding stages from all angles of the set. Also using a double tier stage whilst the female actors admirably manage to run up and down the steep stairs, in heels!

Rounding together with an emotive hospital scene between the two old friends and finishing on a classic red v blue touch from the TV show, The Liver Birds: Flying Home  is a great watch offering poignant memories to any old fan and great for young audiences to be introduced to old-school Liverpool.

Liver Birds Flying Home is at the Royal Court until May 12. TICKETS