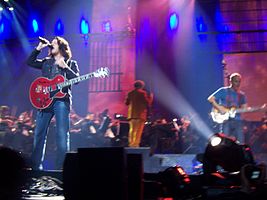 Celebrating three decades of hits, Tears for Fears return to the Royal Albert Hall in 2017 for the first time since 1985!

Tears For Fears are one of modern music’s most influential bands, with songs including Mad World, Change, Pale Shelter, Shout, Everybody Wants To Rule The World, Sowing The Seeds of Love and Everybody Loves A Happy Ending. 2017 marks the beginning of a new era for the band with the promise of their first new release in 13 years.

Formed in Bath in 1981 by Roland Orzabal and Curt Smith, their 1984 album Songs From the Big Chair bringing them world wide acclaim!