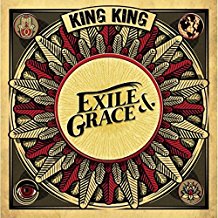 For anybody familiar with the work of King King, it isn’t going to come as too much of a surprise to read that Exile & Grace is an album that’s been more than touched with the ‘magic stick’, it’s been beaten relentlessly over the head with it.

An album so good it can only be hoped the band play, live, tracks one though to nine!

What makes this album stand out from, say, Reaching for the Light, their 2015 offering, though, is the band’s obvious confidence. Not for one second of these nine exemplary tracks does the listener feel as though they’re in the company of a recording band, but instead one that’s going full on to entertain them, live, right there in their music room.

Even the slowest, most angst filled track in the collection, Find Your Way Home, has a resonance that cuts to the quick in a subtle yet oddly lethal way, with Bob Fridzema’s majestic Hammond playing merely serving to hold the duel pinion of Lindsay Coulson’s forever immaculate bass and Wayne Proctor’s driving drums in place.

Then of course there is Alan Nimmo’s grit-baked voice, joie de vivre and outlandishly brilliant guitar work. Tear It All Up – the track from which the album bears its name hidden within the beautifully constructed lyric line – is just so simply, OH! inspiring, it isn’t easy to say that it isn’t the album’s strongest.

That honour falls to, if only marginally, Betrayed Me simply because it isn’t often Alan Nimmo indulges himself in some delightfully laid back guitar playing. It is also, arguably, along with the delicious closing track I Don’t Wanna Lie, the bluesiest track on the disc and is riddled with such heartfelt, soul burning passion it almost catches fire.

In all honesty, though, this is not a blues album per se. What it is however is a master class in production, mixing, musicianship, lyricism and bliss; an album that scratches in big BOLD LETTERS just where King King are at right now; an album that’s a lot less exile and a hell of a lot more grace!