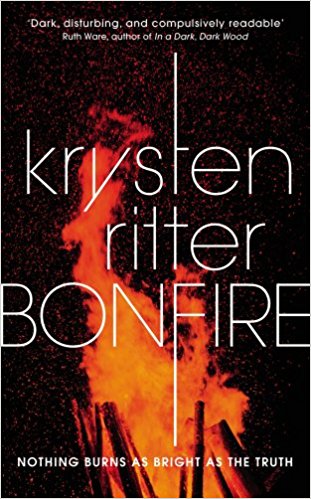 You may recognise the name Krysten Ritter as being star of several American TV shows such as Jessica Jones, The Defenders and Breaking Bad. However less familiar might be the fact that Ritter has published her debut novel, Bonfire: described previously as being ‘dark, disturbing and compulsively readable’ amongst the blurb.

Fair descriptions? Unquestionably! This is writing that’s as tight as a ball of rubber bands, as compelling to read as anything yet to be published this year and as memorable a debut to have come around in a very, very long time.

It has been ten years since Abby Williams left home and scrubbed away all evidence of her small town roots. Now working as an environmental lawyer in Chicago, she has a thriving career, a modern apartment, and her pick of meaningless one-night stands.

When a new case takes her back home to Barrens, Indiana, the life Abby painstakingly created begins to crack. Tasked with investigating Optimal Plastics, the town’s economic heart, she begins to find strange connections to a decade-old scandal involving the popular Kaycee Mitchell and her friends―just before Kaycee disappeared for good.

As Abby tries desperately to find out what happened to Kaycee, troubling memories begin to resurface and she begins to doubt her own observations. And when she unearths an even more disturbing secret, her search threatens the reputations, and lives, of the community and risks exposing a darkness that may consume her.

Cutting directly to the chase, Bonfire is an insomniac reader’s dream, it really is that unputdownable. Fast, intriguing and deliciously devised, Ritter has devised a plot that is so twistingly tangible, it is as though she herself is in the room ramping up your blood pressure as each pages flips over to the next.

Then there are the characters. Abby could, from the overview, come across as being a little formulaic: a lawyer with issues returns to the town responsible for her problems. Rest assured though … there is absolutely nothing formulaic about Abby Williams. So much so, it quickly becomes obvious that Ritter’s involvement with Silent Machine – the production company committed to highlighting complex female protagonists – is well served here.

Yet it isn’t only the females in Bonfire which ensnare the reader – although if there’s a more gloriously vile woman than Misha Jennings, then I can’t recall them – but also the stunning array of males which light up the narrative. Brett is dark and brooding which balances Condor’s naiveté beautifully. Then there is homeliness of Sherriff Khan counteracted by the sadness Abby’s once puritanical father conjures up. In total this may only number a few of the many, but what a few they are.

Ritter’s sense of time and place sparkles in bringing the action home through the actions of Abby’s past, whereas the unrelenting pace is, at times, quite literally punchy, raunchy and ultimately breathless.

The scent of sulphur may have relented throughout the November months in Britain. However with what is an outlandishly outstanding debut, Krysten Ritter has rekindled the flames and delivered the piping-hot Bonfire to keep you warm through the dark, autumnal night.