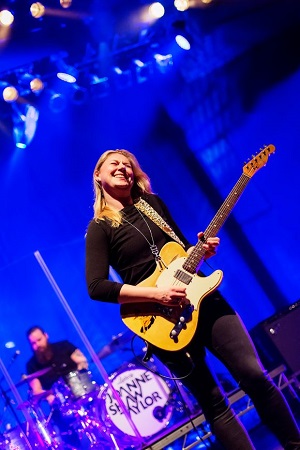 There’s a chilly, autumnal nip in the air in New Brighton this evening, yet inside the Floral Pavilion there’s a palpable sense of anticipation. And why not, after all on the bill are two of the hottest blues guitarists around are in town: the Black Country’s guitar juggernaut Joanne Shaw Taylor and South African phenomenon Dan Patlansky. The night promises great things and the night does not disappoint.

Strolling on to stage, Patlansky picks up his guitar and from that moment on proceeds to rock the holy hot hell out of the place. In fact so gritty, dirty and downright fierce is Patlansky’s opening onslaught it’s as though he has a personal grudge against the instrument in his hands.

Added to this are his vocals, which resonate with such power there’s a strong possibility blood might issue forth from his throat at any given moment. Fortunately this isn’t the case, but songs such as Sonovafaith and Heartbeat remain as refreshingly energised now as they did when first released upon Patlansky’s award winning Introvertigo album a year last summer.

German backers Jonathan Murphy working out on some steadfast bass, Felix Dehmel on immaculate drums and Tom Gatza demonstrating some quite astonishing keyboard mastery, Patlasnky’s launch pad is solid. Yet what he manages to generate in his playing is clear passion that sends ripples of enthusiasm out amongst the audience that are contagious.

By the time he reaches his closing and jaw droppingly marvellous guitar sol – during which he seems to rearrange his guitar and yet still manages to wring a tune from it – then they’re his to do with as he wishes.

There’s a new album on the way. Perfection Kills is released on February 2, followed by a supporting tour later in the year. Do yourselves a favour and grab yourselves a ticket as soon as you can. On this evidence they’re not going to be around long, that’s for sure.

So Joanne Shaw Taylor: are there any superlatives left to adequately describe her continued rise or her remarkable talents? Doubtful but majestic and imperious might be two that don’t feel in the slightest hyperbolic.

Dyin’ To Know from the latest album Wild kicks things off, with Oliver Perry’s thunderous drumming driving the beat from the rear and with Luigi Casenova’s bass steering the sum of the whole with a bass that simply swoops and sweeps around like an eagle on speed.

However it is the keys of former King King man Bob Fridzema that helps underpin the whole shebang. His solo during Time Has Come and the control on display during Diamonds in the Dirt are mesmeric, whereas Shaw Taylor’s own game more than adequately rises to meet it head on.

Jump That Train is an absolute joy to listen to, whereas Tried, Trusted & True grows ever stronger – along with No Reason to Stay – the more it is given a live airing.

Going Home closes what is a magnificent set after 90 minutes of spellbinding musicianship. With more than just a smattering of gold dust to set things a sparkling, the crowd is free to go out into the chilly night air once more; their hearts just that little bit warmer, their hands ringing from the applause that’s been showered upon both artists and their bands.

A rockin’ night of blues indeed!