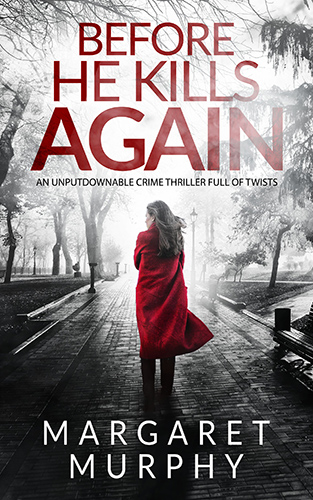 Before He Kills Again

Welcome back Margaret Murphy, to one of the best, most meticulous and most underrated authors around is back with a bang and a brand new detective.

DC Cassie Rowan is a young policewoman who has been the main carer for her little brother Neil since their parents died. She has to balance this role with her demanding job. She is working undercover on the streets of Liverpool trying to find the ‘Furman’, a man who has been brutally assaulting sex workers. Cassie blames herself and another detective, Wicks, for not catching him sooner.

Margaret Murphy has an impressive CV: past Chair of the Crime Writers Association (CWA), founder of Murder Squad, and a former RLF Writing Fellow and Reading Round Lector. She’s been a country park ranger, biology teacher, dyslexia specialist and Visiting Professor in creative writing. A Short Story Dagger and CWA Red Herring award winner, she has also been shortlisted for the ‘First Blood’ critics award and CWA Dagger in the Library.

She has written books under the pseudonyms Ashley Dyer and A D Garrett and is the epitome of persistence and determination. Most importantly, I have no hesitation calling Margaret a friend as well as a mentor.

Getting introduced to a new detective series is one of the great joys of reading, particularl when in the hands of such an accomplished author. Cassie Rowan is feisty and likable. She desperately wants to do her job well and seems to dislike the fact she has to rely on teamwork to achieve this.  She’s pretty down to Earth and relatable, with a vulnerable side which makes her an excellent female protagonist.  This novel also highlights issues faced by women in some jobs. Cassie has to deal with these with minimum support from senior officers, something many can identify with … not just in the police service.

To begin with, this novel has a lot of characters and each chapter is told from a different perspective.  You need to concentrate across the first part of the book to keep track of each of them and it took a little while to get my head around who is who. Once this is done the narrative the plot becomes engrossing.

‘The Furman’ is twisted but realistic and seeing his perspective woven in-between chapters brings a terrifying aspect to the plot.

It’s a longer novel than your average but the story unfolds quickly with plenty of action, twists and turns to keep the reader’s attention.  There is an intensity to the whole narrative and at some points I was holding my breath and reading at a crazy speed to find out what was going to happen. I really enjoyed this first in a new series and cannot wait to read the next instalment and is definitely for crime fans who like the darker side.

You can order Before He Kills Again by Margaret Murphy by clicking the image below.