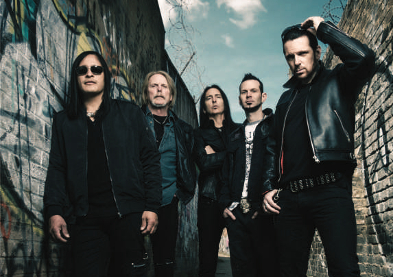 Rock royalty Black Star Riders will be calling in to Parr Hall next month as part of a tour to celebrate the release of their third studio album Heavy Fire.

“There’s nothing more exciting than playing live. BSR are absolutely thrilled to get back out in the UK, it’s a wonderful way to round out a great year,” vocalist Ricky Warwick said.

Formed in 2012 and taking inspiration for their name from a gang of outlaws in the 1993 western film Tombstone, Black Star Riders are a band of impressive pedigree.

The record went on to gain worldwide chart success, reaching No 1 in the UK rock and indie charts, No 3 in the UK vinyl chart and No 6 in the UK national chart, as well as enjoying success in Germany and USA.

The band are due to share their colossal talent with the Warrington audience on Friday 10 November as part of the Coming Under Heavy Fire tour with support from special guests Blues Pills, Tax the Heat and Dirty Thrills.

Formed in 2011, the multinational quartet Blues Pills released their exciting self-titled debut in 2014 before following up with their sophomore release Lady in Gold in 2016.

They’ve toured non-stop for the past few years playing with the likes of Deep Purple, Rival Sons and Kadavar as well as headline shows; their organic blend of blues, classic rock and soul wins over audiences around the world.

Zack Anderson, from Blues Pills, said: “We are really excited to warm up the stage for these legends. We hope to see a lot of familiar faces in front of the stage and are really looking forward to meeting a lot of new people.”

Tax the Heat have just come out of the studio where they have been recording their follow up to the critically acclaimed debut album Fed to the Lions.

The highly-anticipated, as yet unnamed, second album is scheduled for release by Nuclear Blast Entertainment in early 2018.

London-based Dirty Thrills will open the bill with a set containing songs from their debut album Heavy Living.