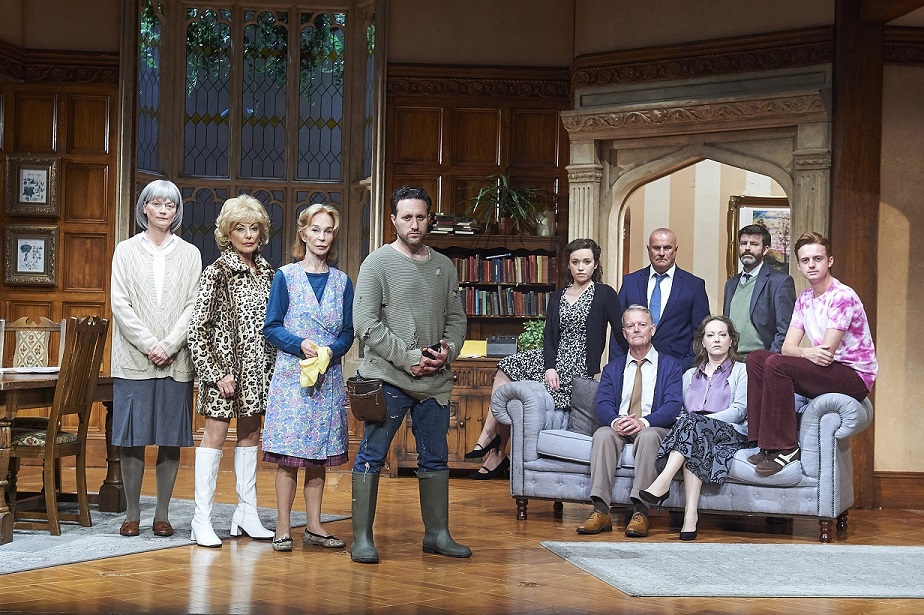 A real treat is in store for all lovers of classic crime drama. Continuing a successful UK-wide tour throughout 2017, Chris Ellison and Robert Duncan will join the cast of The Classic Thriller Theatre Company’s A Judgement in Stone, with dates including The Manchester Opera House and The Floral Pavilion in New Brighton.

A Judgement in Stone comes to the Opera House Manchester from Monday 13 November through to Saturday 18 November 2017. The run includes two matinee performances.

The production began the second leg of its national tour this Autumn at the beginning of September when it opened at the Oxford Playhouse.

Eunice struggles to fit in. When she joins a wealthy family as their housekeeper, the very reason for her awkwardness, long hidden and deeply buried, leads inexorably to a terrible tale of murder in cold blood – on Valentine’s Day. Ruth Rendell’s brilliant plot unravels a lifetime of deceit, despair and cover-ups which, when revealed, brings a shocking revelation almost as grizzly as murder itself.

Building on the phenomenal decade-long success of The Agatha Christie Theatre Company, which sold over two million tickets and continually played to packed houses around the UK, Bill Kenwright presents A Judgement in Stone – adapted from one of the most celebrated works of Ruth Rendell often hailed as the successor to Agatha Christie.

Rendell was first published in 1964 and was awarded a CBE in 1996. Her prolific output included film and TV, as well as 80 novels and one of the genre’s most famous characters, Chief Inspector Wexford. A Judgement in Stone is loved for its brilliant rendering of character, plot and motive, and is undoubtedly Rendell at her thrilling best.

Chris Ellison has been a familiar face on our TV screens for over 40 years appearing in programmes such as The Sweeney, Dempsey and Makepeace, The Professionals and Minder. In the late 80s and throughout the 90s, he became a truly national figure playing the iconic Frank Burnside in the long running police drama The Bill.

This led on to the spin-off series Burnside and also a separate series Ellington about a sports agent. In recent years, Chris has been busy with a stint in EastEnders and several Brit Gangster movies. Chris recently appeared as the guest star on the Christmas addition of Casualty and is about to appear in a Sky movie with David Walliams, having already worked with David last year on Walliams and Friend. Chris is also well-known as a Panto baddie having appeared all over the country. He also starred recently as Magwitch in the West End production of Great Expectations.

Robert Duncan is best known for his role as the as jargon-spouting chief executive Gus Hedges in Drop the Dead Donkey. He has played lead roles in theatres the length and breadth of the country including Stanley Kowalski in A Streetcar Named Desire; Petruchio in The Taming of the Shrew; Mr Rochester in Jane Eyre; and Frank in Willy Russell’s Educating Rita. More recently, Robert has starred in 12 Angry Men in the West End and on tour. As a member of the Agatha Christie Theatre Company, he starred in Witness for the Prosecution, Verdict and Go Back For Murder, and for The Classic Thriller Theatre Company, Rehearsal For Murder.

Continuing in the cast are Sophie Ward who played the beautiful, ill-fated love interest of Young Sherlock Holmes and Dr Helen Trent in long-running ITV drama Heartbeat. She also starred in the acclaimed mini-series, A Dark Adapted Eye, alongside Helena Bonham Carter and as Isabella alongside Juliette Binoche in the 1992 film version of Wuthering Heights.

Deborah Grant has starred in the BBC’s Not Going Out, Bergerac and Roger, Roger. As well as her many TV and film appearances Deborah is a stage veteran; from her first performance on stage at the age of four-years-old, she has performed in many West End and national touring productions and starred opposite Michael Crawford in the West End debut of Barnum at the London Palladium.

Movie icon Shirley Anne Field has had a long and successful career. Her breakthrough role came when she got the part of Tina the Beauty Queen opposite Sir Laurence Oliver in The Entertainer. Her role as Doreen in Saturday Night and Sunday Morning soon followed, with her next role as the female lead in the Hollywood title The War Lover opposite Steve McQueen and Robert Wagner. More recently Shirley Anne was in the award-winning Beautiful Relics, a short film directed by Adrian Hedgecock, and touring theatre productions The Cemetery Club and Five Blue-Haired Ladies Sitting on a Green Park Bench.

The production is directed by actor Roy Marsden.

Antony Costa shot to fame in chart topping boy band Blue in early 2000 becoming a huge commercial success in the United Kingdom and many other countries, selling 15 million records worldwide to date, including 3.3 million albums and 1 million singles in the UK alone. On stage, Antony has starred in the lead role of Mickey Johnstone in the West End production of the long-running musical Blood Brothers, directed and produced by Bill Kenwright, as well as starring in the 10th anniversary tour of Boogie Nights; the 40th anniversary of The Who’s iconic musical Tommy (Blackpool Opera House); Jack and the Beanstalk (Ipswich Regent Theatre); Popstar: The Musical (UK tour); and recently in TV’s Casualty.

Ben Nealon is an Agatha Christie Company stalwart. On television Ben is best known as Lt Forsythe in the popular ITV award winning drama series Soldier Soldier, he also featured in the Oscar-nominated Lagaan: Once Upon a Time in India. The cast is completed by Rosie Thomson, Jennifer Sims, and Joshua Price.

The production is directed by actor Roy Marsden, best known for his role as Commander Adam Dalgliesh in Anglia TV’s P.D. James series, which he played for 15 years. He has also been directing plays since the age of 15, and had two successful West End runs with Noel Coward’s Volcano and Agatha Christie’s (under the pen name Mary Westmacott) A Daughter’s A Daughter.

His recent work for Bill Kenwright includes directing a UK tour of Susan Hill’s The Small Hand, and the debut production for The Classic Thriller Theatre Company, Rehearsal For Murder, written by the creators of Murder, She Wrote and Columbo, Levinson and Link.

Ruth Rendell who died in May 2015, was an exceptional crime writer and is credited with having revitalised the mystery genre. She won numerous awards in her lifetime, including the Crime Writers’ Association Gold Dagger for best crime novel with A Demon In My View, a Gold Dagger Award for Live Flesh and the Sunday Times Literary Award. She was awarded the Crime Writers’ Association Cartier Diamond Dagger for sustained excellence in crime writing. In addition to the CBE she became a Life Peer in 1997. Her debut novel From Doon With Death introduced Inspector Wexford who went on to feature in 24 of her subsequent novels, many of which were adapted for television. A Judgement in Stone was also filmed twice, as The Housekeeper (1986) starring Rita Tushingham and as La Cérémonie (1995), directed by Claude Chabrol and starring Sandrine Bonnaire.

Ruth Rendell’s A Judgement in Stone is at The New Brighton Floral Pavilion November 6 – 11. For Tickets Click HERE

A Judgement in Stone is at The Manchester Opera House November 13 – 18. For Tickets Click HERE